Some 52 years after its foundation in 1970, Mediterranean Shipping Company (MSC) overtook Maersk Group of Denmark as the world’s biggest container line. 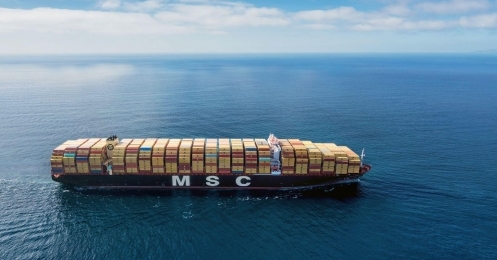 January 6, 2022: Some 52 years after its foundation in 1970, Mediterranean Shipping Company (MSC) overtook Maersk Group of Denmark as the world’s biggest container line.

As of January 5, 2022, MSC deploys a fleet of 645 container ships with a total capacity of 4,284,728 TEUs. The company holds a global market share of 17 percent, according to global ocean fleet statistics of Alphaliner.

"Since 2020, the Swiss company has also grown significantly through the rapid acquisition of 128 secondhand container vessels: an unprecedented number in shipping history," Alphaliner said.

MSC is expected to close its first carrier acquisition and buy a 67 percent majority stake in the Brazilian regional and domestic shipping and logistics firm Log-In Logistica in the first quarter of 2022. "This will add a further 15,000 TEU capacity to the fleet of MSC Group."

In December of 2021, MSC signed an agreement with the French Bolloré Group to acquire Bolloré Africa Logistics, a logistics provider and terminal operator in Africa on the basis of an enterprise value, net of minority interests, for €5.7 billion.($6.43 billion).

"With a confirmed vessel order book of almost exactly 1,000,000 TEUs, the largest of all carriers, MSC is expected to further consolidate its position as the world’s largest container line over the course of 2022," Alphaliner added.

Container shipping 2022: Low reliability, high interest
Peter Sand, Chief Analyst, Xeneta, while summarising the container industry developments of 2021 and giving an outlook for 2022 said as long as reliability in container shipping remains low, interest in it will remain high."Ensuring the flow of goods is integral to all parts of the companies involved in imports. If the logistics department can’t guarantee the time and place of goods delivery, they can’t sell them. What happens afterward, though? Will a return to higher schedule reliability mean a return to the shadows for shipping, even if transport costs remain higher than they averaged in the past decade? Probably." 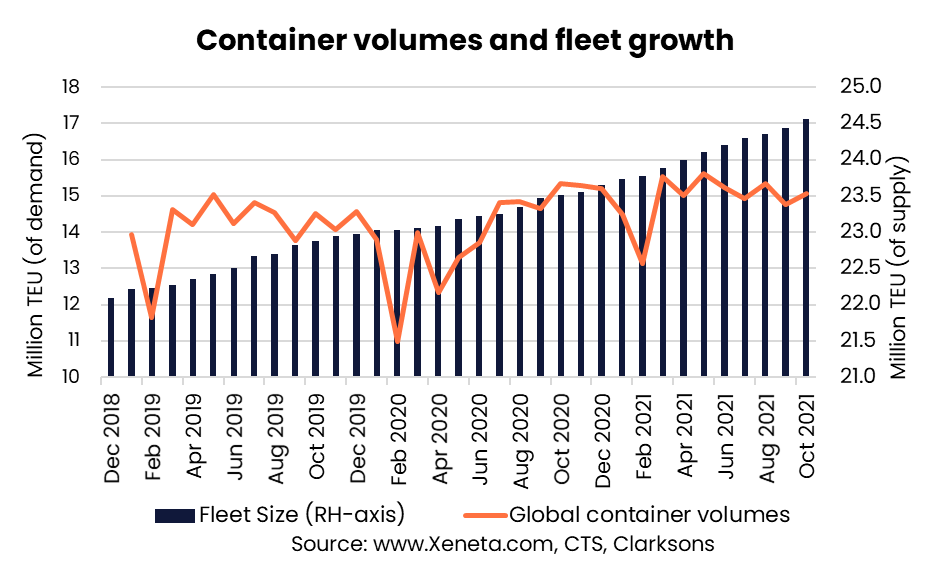 The disruption from these past years means it’s unlikely for shipping to be forgotten quickly, especially within the companies where it can disrupt the wider business.

Summing it up on a very high level - record-high US container imports, driven by US consumers buying Asian-produced goods at an unprecedented level explain much of the extraordinary situation in container shipping, Sand said. "Other contributors to the industry chaos include pandemic-related port closures and disruption to hinterland connections. As ships are by their nature mobile assets, they chase the trades they can earn the most money on, leading to two outcomes. Firstly, if rates on one trade suddenly shoot upwards, as was the case in the Far East to US rates, rates on other routes follow the trend to keep them attractive to ship operators – otherwise, they just move the ship. Adding on to this effect, some operators decided that despite higher freight rates on their usual trade lane, they still prefer to send their ships to the most lucrative market."

Reverse cascading saw smaller ships, which had in past years been pushed down to secondary trades when larger ships were delivered, deployed on the transpacific trade lane. "This, in turn, reduced the capacity on their previous trade lane driving freight rates up here while doing little to help solve the transpacific problems. The extra ships got stuck at anchorages, some of which set sail without the necessary agreements with terminals," Sand added.

Lastly, a delay at destination ports means that ships are often late to start their next scheduled (origin) departure, leaving carriers with a blank sailing option or finding another available ship. This left everyone scrambling to get hold of the spare capacity available on the charter market or taking ships out from another trade.

When the supply of goods is threatened, price becomes secondary – with success primarily depending on the timely delivery of goods. "Reliability will be key to navigating 2022. Consider those shippers who fixed long-term contracts for this year at the end of 2020 or the start of 2021. Rates fixed at that time were high compared to historical rates but far from today’s rates. So long as these shippers kept to the number of contracted boxes, they were still enjoying relatively low rates. Their problem came when they had extra volumes. In the past, carriers were flexible on this, allowing the extra boxes onboard, but that flexibility was gone this year (2021), leaving these shippers to fight for space on the spot market and swallow the higher rates. The more exposed you were to the spot market, the harder the past year has been."

Developing a good relationship with carriers, viewing it more as a strategic partnership than a game that can be won by securing the lowest price, will insulate shippers from some of the risks and black swan events that 2022 doubtless holds in store, Sand concluded.

Pre-Chinese New Year (CNY) cargo rush is pushing the ceiling for premium rates even higher as some shippers with urgent cargo are willing to pay sky-high rates for sought-after space, Flexport said in its update. "Capacity and sailings are limited relative to demand, largely due to sliding schedules, accumulating delays, and blanked sailings related to severe port congestion. Rate increases were implemented for the first half of January some of which are near the GRI levels seen over the summer."

Potentially large increases are expected for January due to strong pre-CNY demand, and more shippers and importers are converting bookings from standard to premium.

​​​Space continues to be critical, and capacity is critical/severe under-capacity

Flexport recommendation: "Book at least 4 to 5 weeks prior to CRD. Consider premium options, which may be limited."

Even as the LA/LB ports continue to struggle with congestion, they are facing a virus-driven challenge of their own. "As omicron surges in southern California, more and more of the ports’ labour force has tested positive – including two thirds of those tested on Tuesday – and authorities are bracing for a slowdown in operations, says Judah Levine, Head of Research, Freightos Group.

"Though everyone hoped that the new year would bring steady improvement in both the pandemic and its impacts on logistics, so far it’s more of the same. China’s “Zero COVID” policy is starting to impact operations at the major port of Ningbo. Area closures and restrictions to contain the spread in the region are limiting truck access to the port, with reports of some warehouse closures as well. The recent increase in cases could limit manufacturing in the region and in other areas with outbreaks. Broader travel restrictions could also mean factories that normally close over the Lunar New Year (LNY) holiday will stay open, reducing the typical pre-holiday pressure on logistics," Levine said.

Rates are expected to climb as LNY approaches, and any additional slow down due to Covid will likely exacerbate the congestion and backlog.