September 14, 2017: The second international conference and exhibition of the maritime industry, Maritime Nation India saw huge footfall on the first day of the event, held at the CIDCO exhibition Centre, Navi Mumbai. 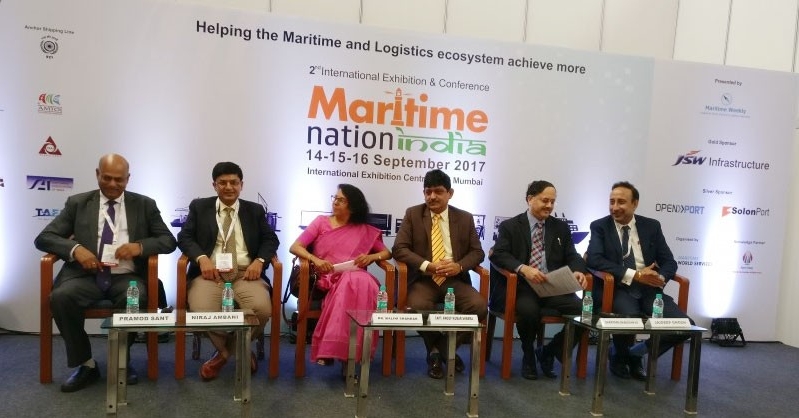 September 14, 2017: The second international conference and exhibition of the maritime industry, Maritime Nation India saw huge footfall on the first day of the event, held at the CIDCO exhibition Centre, Navi Mumbai.

Maritime Nation India served as a platform for the business interactions amongst the foreign delegates, exhibitors, speakers and Indian maritime professionals, who exchanged their views on all maritime areas.

Shankar stated that the government is taking several initiatives to leverage the maritime industry. She said that inland waterways are being rejuvenated to give Indian maritime a fillip. She however also stated that the shipping sector is influenced by the ups and downs in the global and Indian economy, which are not improving that well. “We are ready to take advantage when the economy moves up,” she said.

Meanwhile, commenting over the topic, Captain Sharma stated that while nobody can do anything much about the international market, the maritime industry should manage the costs, try and buy new ships and encourage more mergers and acquisitions as when larger players come in, rates will definitely improve. He also said that new trade lanes are also likely to open for India, when Chabahar Port starts operating. During the event, he also announced that the SCI has crossed six million DWT, terming it as a historic moment for the organisation. He also informed that Shipping Corporation of India (SCI) has taken over a second hand VLGC (very large Gas Carrier), which is 15 years old and the youngest in the Indian Fleet.

The panel agreed on the fact that collaboration between the private sector and the government along with technology upgradation are a must to eliminate inefficiencies and for process simplification.