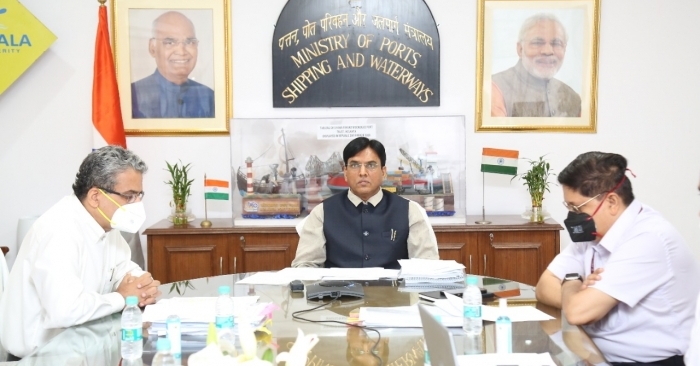 X
The MSDC was constituted in May 1997 to assess in consultation with state governments, the future development of existing and new minor ports by the respective maritime states either directly or through captive users and private participation.
Our Correspondent25 Jun 2021 6:20 AM GMT

MSDC
MSDC is an apex advisory body for the development of the maritime sector and aims to ensure the integrated development of major and non-major ports. The MSDC was constituted in May 1997 to assess in consultation with state governments, the future development of existing and new minor ports by the respective maritime states either directly or through captive users and private participation.

Addressing the council, Mansukh Mandaviya said that the objective of the Maritime State Development Council (MSDC) is to develop a national plan for the development of the maritime sector beneficial for both states and the centre and to adopt the best practices for the sector.

He highlighted that the Indian Port Bill 2021 will facilitate to have optimum management and utilization of the coastline by way of participation by both the union government and maritime states/union territories.

Indian Port Bill 2021
In FY 2020, the traffic handled at Indian ports is about 1.2 billion MT, which is expected to increase to 2.5 billion MT by 2030. On the other hand, only a few ports in India are having deeper draft which can handle capsize vessels. In addition, there are around 100 non-functional ports distributed across the coast of India. The ever-increasing size of ships mandates to have deeper draft ports and indeed mega ports need to be developed. Similarly, the non-functional ports also need to be prioritized and developed.

A national-level integrated approach is required to augment the existing ports or to develop new ports in an efficient and sustainable manner which in turn will reduce the freight costs to a greater extent and improve the trade growth. The national-level integrated port planning is also highlighted in various report including 'The World Bank's Port Reform book, UNCTAD's ‘Handbook for Planners in Developing Countries’ etc.

MSDC will advise on the planning of all ports including Major Ports. In addition, several conventions pertaining to safety, security and prevention of pollution are incorporated in IP Bill 2021 for implementation of all requirements stipulated in such conventions by all ports.

To address the issues in funding and for the projects that are not suitable to develop under PPP mode, it is suggested that a Special Purpose Vehicle (SPV) may be formed between state government, central government and private players for which interest from the state governments/UTs is requested during the meeting.

The MoPSW requested the coastal states/UTs to expedite the implementation of the projects where the state government is the implementation agency, and funding support can be considered for central funding via grants from MoPSW or via equity funding through Sagarmala Development Company (SDCL).