A. P. Moller - Maersk signed an agreement with Saudi Ports Authority “Mawani” committing to an investment of $136 million (510 million Saudi Riyals) over a period of 25 years to set up an integrated logistics park at the Jeddah Islamic Port in Saudi Arabia. 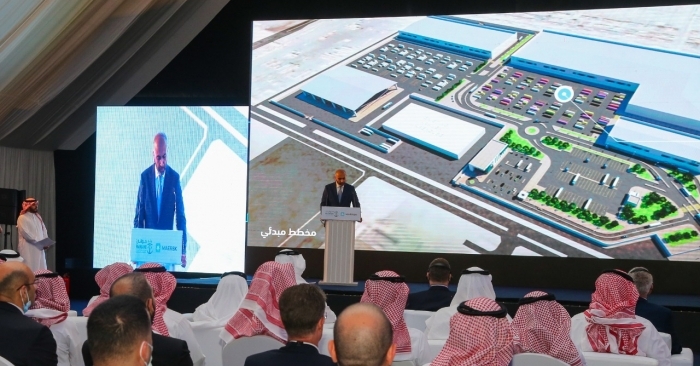 November 1, 2021: A. P. Moller - Maersk signed an agreement with Saudi Ports Authority “Mawani” committing to an investment of $136 million (510 million Saudi Riyals) over a period of 25 years to set up an integrated logistics park at the Jeddah Islamic Port in Saudi Arabia.

“The greenfield project spread over an area of 205,000 sq m will be the first of its kind at the Jeddah Port offering an array of solutions with an aim to connect and simplify the supply chains of importers and exporters in the Kingdom. Maersk will also be investing heavily in renewable energy to power this facility and eventually achieve carbon-neutrality. The project is expected to create more than 2,500 direct and indirect jobs in Saudi Arabia,” reads the release.

Saudi Arabia’s Vision 2030 aims at more than tripling the share of non-oil exports from Saudi Arabia from its current levels to reach 50 percent of its total exports. It aims at substantially raising the Kingdom’s global ranking to top 25 in Logistics Performance Index to ensure that Saudi Arabia becomes the regional leader in logistics.

Richard Morgan, managing director, Maersk West & Central Asia said, “We are building an innovative, digital and technologically-advanced logistics infrastructure on the foundations of our strong network of global shipping and logistics & services to create value for customers in the region. Our ambition is not only to connect and simplify our customers’ supply chains, but also be a catalyst in the growth of trade and economies through our customer-centric solutions”.

President of the Saudi Ports Authority, Omar bin Talal Hariri said, “The strategic partnership between the authority and Maersk is an important step to achieve our ambition for Jeddah Islamic Port to become among the top ten ports in the world by 2030, with the volume of container handling reaching 18 million TEUs. I am confident that this partnership will greatly enhance the distinguished operational capabilities of Jeddah Islamic Port, which ranks first among the Red Sea ports, with its strategic location on the Red Sea coast linking the international shipping route between East and West.”

Saudi Arabia’s Jeddah Islamic Port sits on the Red Sea Coast connecting the international shipping route between the east and the west. With over 5 million twenty-feet equivalent units (TEUs) of containers flowing in and out of Jeddah Islamic Port, it is the largest port in terms of volume and cargo handling in Saudi Arabia and second largest in GCC (Gulf Cooperation Council) countries. Over 2.5 million TEUs tranship through the Jeddah Islamic Port every year. The port also connects to hinterland through a strong road and rail network.

The bonded and non-bonded warehousing & distribution (W&D) facility will cover more than 70 percent of the total area while the remaining part will act as a hub for transhipment, air freight and LCL cargo. The W&D part will have several different sections to accommodate general warehousing (food & beverages, furniture, automobiles, chemicals, textile & apparel and machinery, appliances & electronics) and cold chain storage (fruits & vegetables, protein and confectionary & consumables). To cater to the rapid penetration of e-commerce in Saudi Arabia, the facility will also have a dedicated e-commerce fulfilment centre. The Integrated Logistics Park will be able to handle annual volumes close to 200,000 TEUs across different products.

“The vision for the Kingdom to diversify its economy beyond the oil sector is an important one to enable long term growth for Saudi Arabia. At Maersk, we not only believe in this vision, but are also committed to play a role by upgrading the logistics infrastructure through our integrated offering and thus opening more avenues for traders in Saudi Arabia”, said Mohamad Shihab, managing director, Maersk Saudi Arabia.

Maersk is also charting its path to make the facility carbon-neutral eventually. The warehouses, cold storages and office building will all be powered with renewable solar energy. Even the yard machinery including forklifts, reach stackers, empty container handlers, trucks and other vehicles deployed for the movement of cargo will be electric.