March 11, 2020: The global container logistics player, Maersk announced the opening of a new 70-acres Inland Container Depot (ICD) in Madurai as the new acceptance point to its customers in the hinterland of Tamil Nadu and southern part of India. 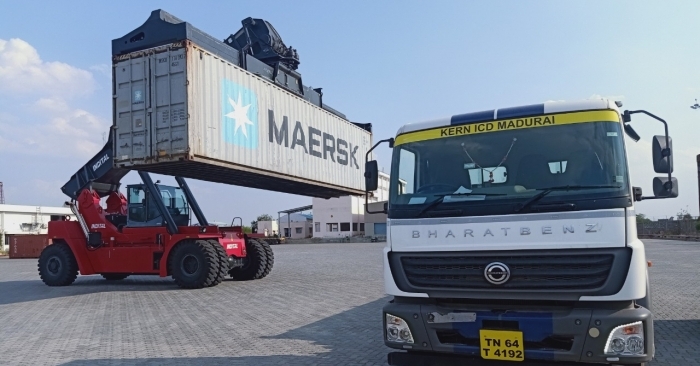 X
Equipped with a warehouse to support faster cargo clearance, the ICD is expected to help reduce the overall logistics costs by up to 30%.
Our Correspondent11 March 2020 10:37 AM GMT

March 11, 2020: The global container logistics player, Maersk announced the opening of its new acceptance point at the 70-acre Inland Container Depot (ICD) Madurai, owned by KERN, to its customers in the hinterland of Tamil Nadu and southern part of India.

“With an infrastructure spread over a total area of about 70 acres, the state-of-art ICD is one of the largest in the country and will serve as a major infrastructural hub for South India. Equipped with a warehouse to support faster cargo clearance, the ICD will help reduce the overall logistics costs by up to 30%, while also providing operational transparency to customers,” says the release.

Until recently, importers shipped their cargo to Tuticorin Port where it was cleared by Customs, destuffed and kept at a warehouse. As per the customer requirements, the cargo was then being moved by trucks from Tuticorin to its final delivery point in and around Madurai. Exporters too had to pick up empty containers from Tuticorin and bring them all the way to their factories. With ICD Madurai as a new acceptance point, Maersk will help move the cargo directly to Madurai, speed up the clearance process and manage de-stuffing and storage at the warehouse at Madurai. The new ICD also provides customers with a choice of taking the container and delivering it at the final delivery point, and return containers back in Madurai. With operations at the new ICD, Maersk has managed to cut down significantly on the transport time to and from Tuticorin Port and effectively brought down the cost of logistics for its customers by up to 30% for the inland logistics leg of transport.

Steve Felder, managing director, Maersk South Asia, said “As the global integrator of container logistics, our aim is to simplify trade processes for our customers by facilitating end-to-end logistics, reducing the transit time & cost to make logistics more accessible and efficient for everyone. Our operations at ICD Madurai are aimed at reducing logistics costs for our customers by cutting the cargo transport journey by up to 150 km. We are also tapping into the hinterlands’ potential by opening up new trade possibilities and enabling ease of doing business for the trading community in the region.”

The key infrastructure offerings at ICD Madurai include 24x7 operations, ample storage including bonded warehousing facilities, faster claim rate of duty drawback & GST refund, and capability to handle air cargo connecting Chennai & Bangalore. Customers are expected to benefit from faster clearance of their cargo in Madurai as compared to Tuticorin. They will also have the advantage of same-day clearance and gate-in at the terminal.