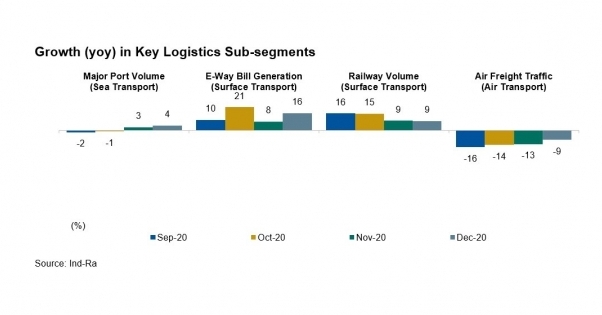 While passenger numbers for airlines are still down on a YoY basis, the start of vaccination drives in several countries globally and the Indian government allowing 80 percent of fleet to be deployed are key positives recently. While both these developments should be supportive of a recovery in operating cash flow and liquidity in coming months, this will likely be offset at least partly by ongoing higher fuel prices (Brent crude up 158 percent in May 2020-January 2021).

Port volumes grow again as EXIM trade turns a corner
India’s EXIM volume turned positive (5 percent YoY) in December 2020 for the first time since February 2020, as port volumes posted a second consecutive month of positive growth. It rose 7 percent MoM and 4 percent YoY in December 2020. During April-December 2020, the overall volumes remained down 9 percent YoY. The growth in December has been led by strong YoY growth in iron ore (14 percent), other liquids (16 percent) and container volumes (15 percent) as well as other goods segment (13 percent). The growth was partially offset by a YoY volume decline in petroleum, oil and lubricants (3 percnet), fertilisers (7 percent) and thermal coal (11 percent). Petroleum, oil and lubricant volumes though grew 9 percent MoM in December 2020 which arrested the decline in volumes to 3 percent YoY (November 2020: down 12 percent YoY; October: down 23 percent YoY).

Container freight rates remained elevated with a substantial increase of about 150 percent during March-December 2020, due to the shortage of containers amid a demand-supply imbalance. Port dwell time for import containers at Jawaharlal Nehru Port Trust remained stable at 21 hours in December 2020 while for export containers it stood at 77 hours.

Vaccine brings hope for air travel, though higher oil prices are concerning
Since the resumption of operations in June 2020, domestic air traffic continued to sequentially improve in December 2020. Domestic passenger traffic rose 15 percent mom in December 2020, although was down 43 percent YoY, while international passenger traffic rose 30 percent mom (down 79 percent YoY). In the domestic operations, passenger load factor stood at 65 -78 percent during December 2020. However, approval for vaccines and governments undertaking vaccination drives in major countries will likely raise consumer confidence in air travel and be supportive of a recovery over the medium term.