October 20, 2020: The Kuehne+Nagel Group demonstrated profitable growth in the third quarter of 2020 with the operating result (EBITDA) increased 27.1 percent to CHF 600 million in July to September quarter. 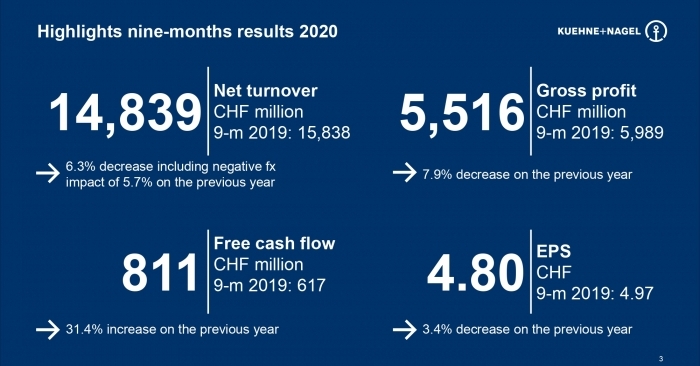 October 20, 2020: The Kuehne+Nagel Group demonstrated profitable growth in the third quarter of 2020 with the operating result (EBITDA) increased 27.1 percent to CHF 600 million from July to September.

Dr. Detlef Trefzger, CEO of Kuehne + Nagel International AG, said, "With our motivated team, we are ready for further growth together with our customers, especially in the pharma & healthcare and e-commerce sectors. Even though we expect considerable uncertainties in the coming months, we are well prepared".

Sea Logistics
In the third quarter of 2020, the earnings development in sea logistics reflected a very positive reversal of trend compared to the first half of the year. The improvement is due to the recovery of demand from SME customers and the increase in imports to Europe and North America from Asia.

In the third quarter of 2020, container volume rose by 10.4 percent to 1.2 million TEUs compared to the second quarter. The unit’s net turnover amounted to almost CHF 1.8 billion and EBIT improved by 12.3 percent year-on-year to CHF 137 million. The conversion rate reached 36.2 percent.

Air Logistics
Improved market conditions in the third quarter of 2020, including the automotive sector and perishable goods, led to a greater than normal seasonal uplift in Air Logistics volumes versus the second quarter. Crisis goods, on the other hand, increasingly shifted to alternative transport routes.

At 354,000 tonnes, air freight volume in the third quarter was 12.8 percent lower than in the same period of the previous year, while net turnover increased by 8.7 percent to CHF 1.2 billion and EBIT by 89.9 percent to CHF 169 million. This includes a positive one-off impact of net CHF 63 million due to early settlement of the contingent consideration of acquisition from 2018.

In September 2020, Air Logistics opened new pharma hubs in Brussels and Johannesburg with direct tarmac access. The even faster handling of goods and the guarantee of product integrity will provide customers with considerable added value, especially for temperature-sensitive vaccines.

Road Logistics
The third quarter of 2020 was characterised by a significant increase in shipments in the Road Logistics business unit versus the previous quarter. In particular, demand for domestic transport capacities in European countries reached pre-crisis levels. In North America, demand for all product segments – with the exception of pharma & healthcare and e-commerce – remained significantly below the previous year's level; however, an initial market revival has been evident since September.

The business unit’s net turnover decreased to CHF 796 million in the third quarter and EBIT was down to CHF 12 million. The continued very weak demand for expo and event logistics had a significant negative impact on the result.

Kuehne+Nagel is preparing – together with its customers – for the future customs clearance (export and import) between the EU and the UK with a digital solution ("Your Easy Brexit Solution").

Contract Logistics
Market share gains in pharma & healthcare services and e-commerce fulfilment as well as stringent cost management led to a significant improvement in earnings in Contract Logistics in the third quarter of 2020 compared to the second quarter.

The business unit’s net turnover in the third quarter was CHF 1.2 billion and EBIT was CHF 53 million. Adjusted for extraordinary income in the third quarter of 2019 and 2020 from real estate sales of CHF 21 million, and CHF 4 million respectively, EBIT increased by 44 percent.

The business unit is continuing to expand its e-commerce fulfilment activities which are driving a significant proportion of new business wins. In Sweden, for example, Kuehne+Nagel will operate a new distribution centre for Amazon.