July 19, 2018: In the first six months of 2018, the Kuehne Nagel Group recorded strong volume growth and a significant increase in EBIT. The EBIT-to-gross-profit ratio (conversion rate) was maintained at a high level. 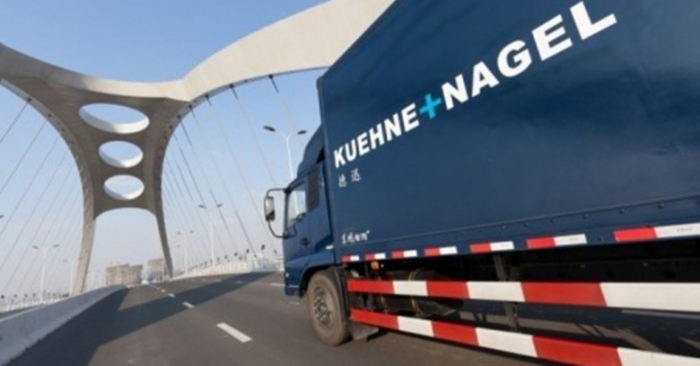 July 19, 2018: In the first six months of 2018, the Kuehne + Nagel Group recorded strong volume growth and a significant increase in EBIT. The EBIT-to-gross-profit ratio (conversion rate) was maintained at a high level.

Dr. Detlef Trefzger, CEO of Kuehne + Nagel International AG, said, “Kuehne + Nagel remains enroute for success in the first half of 2018. We achieved strong volume growth across all business units. This growth combined with active cost management delivered a significant improvement in results confirming the consistency of the implementation of our business strategy. Our high level of industry-specific competence and our digital solutions are key factors here. We monitor the volatile markets and geopolitical developments very closely. Despite this market environment we are confident and ambitious as we enter the second half of the year.” 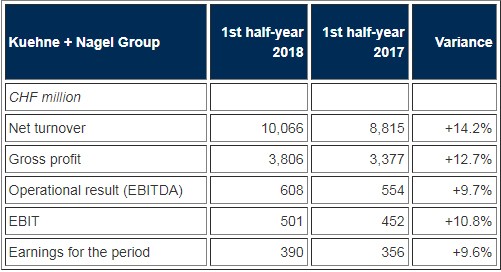 Sea freight
With momentum increasing in the second quarter, Kuehne + Nagel improved seafreight volumes by 8.1 per cent and thus grew considerably faster than the overall market. In the first half of the year 2.289 million standard containers (TEU) were handled, 172,000 more than in the same period of the previous year. The company gained significant new business, mainly with its integrated digital solutions; growth drivers were full-container-load shipments (FCL) and project, oil & gas, marine logistics. EBIT for the first half of the year was up 6.1 percent at CHF 210 million with overall margins stabilising. The conversion rate amounted to 28.6 percent, a leading figure in the industry.

Air freight
Air freight remained successful in the first half of the year and continued its strong performance from the previous quarters. Tonnage increased by 18.1 percent to 863,000 tonnes. Industry-specific solutions made a particularly important contribution here. Compared to the previous year, EBIT increased by 20.5 percent to CHF 182 million. A further increase was also recorded in the conversion rate which with 31.0 per cent is at a high level.

Overland
Kuehne + Nagel's overland transport continued to increase in all business areas. Net turnover rose by 17.7 per cent and gross profit by 16.5 percent. Dynamic growth was achieved in the European and North American trade lanes. Once again, the drivers behind this growth were industry-specific solutions, for example in the pharmaceutical industry and in e-commerce fulfilment. Compared to the previous year, EBIT improved by 48.3 per cent to CHF 43 million.

Contract Logistics
Net turnover in contract logistics increased by 12.2 per cent and gross profit by 11.3 per cent. New business based on scalable and tailored logistics solutions, particularly in e-commerce fulfilment, made a major contribution to this. Due to investments in the further development of the business model as well as the launch of a warehouse management system the EBIT was in line with expectations at CHF 66 million down on the previous year.

Dr. Jorg Wolle, chairman of the board of directors of Kuehne + Nagel International AG, said, “We demonstrated our performance strength yet again in the first half of 2018 and have established a solid basis for the second half of the year. Kuehne + Nagel’s agility and efficiency make us confident that the positive development of the company will continue.”