December 18, 2018: Krishnapatnam Port Company Limited (KPCL) has registered a 7 percent growth in its transshipment volume; clocking 20,600 TEUs for November 2018-19 compared with 19,316 TEU for the same period of the fiscal year 2017-18, making it the largest transshipment port on the east coast of India. 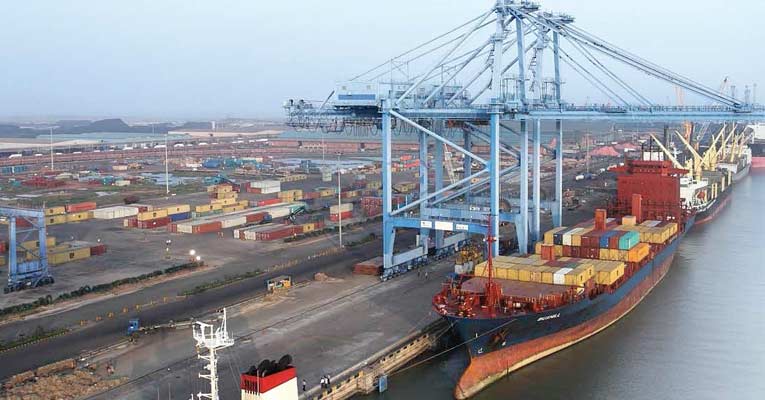 December 18, 2018: Krishnapatnam Port Company Limited (KPCL) has registered a 7 percent growth in its transshipment volume; clocking 20,600 TEUs for November 2018-19 compared with 19,316 TEU for the same period of the fiscal year 2017-18, making it the largest transshipment port on the east coast of India.

In order to enhance its transshipment service offerings, the port had undertaken a recent expansion program for its container terminal – NCT (Navayuga Container Terminal earlier known as Krishnapatnam Port Container Terminal). The expansion involved addition of 250 metres of berth-length to the existing 650 metres and erecting three more QCs (quay cranes). Going forward, the port has announced a total extended quay length of 900 metres with 3 new SPP quay cranes, thus bringing the total number of QCs to 8. Expected to be completed by the fourth quarter of 2018-19, the enhanced infrastructure, will increase the terminal’s capacity from the current 1.2 million TEU to 2 million TEU.

India has been spending billions of dollars to build container transshipment ports to cut its dependence on neighbouring transshipment hubs. Currently about 2.8 million twenty foot equivalent units (TEUs) or about 25 percent of India’s cargo containers are transshipped at ports outside India mainly at Colombo, Singapore, Port Klang, Salalah and Jebel Ali which builds inefficiencies in logistics and raise costs. Of this, Colombo alone accounts for 1.2 million TEUs.

Commenting on the development, Vinita Venkatesh, director, Navayuga Container Terminal said, “Addressing the industrial urgency of EXIM trade for handling transshipment cargo and reducing the dependence on neighbouring ports, Krishnapatnam has been consistently building its infrastructure and restructuring it service offerings. We are confident that our transshipment offerings will enable us to build and sustain long term contracts with multiple shipping lines and will go a long way as an efficient revenue model for Krishnapatnam Port.”

“The decision to invest additional CAPEX ahead of demand is with the objective of ensuring that sufficient quay length and handling infrastructure is available for the numerous mainline services and coastal feeder operators looking to hub transshipment operations at NCT, Krishnapatnam.” she added.

Shreyas Shipping provides a network of feeder vessels between Krishnapatnam and Kolkata, Haldia and other ports on the east coast of India. The company encouraged by the service offerings it availed with Krishnapatnam Port has further expanded its scope of business with the port. The company is today running no less than 3 feeder loops from NCT (Navayuga Container Terminal) at Krishnapatnam to connect with Kolkata , Haldia, Vizag , Paradeep, Kakinada , Tuticorin on the east coast as well as Cochin, Mangalore, Mundra, Kandla, Hazira and Nhava Sheva on the west coast. With this network, Shreyas Shipping and NCT are providing transshipment services to mainline vessels calling at Krishnapatnam, to all container ports on the Indian coastline.

The development was viewed as a huge opportunity by the global container shipping company, Maersk Line, which took up the new initiative immediately and began transshipment operations of its containers from China, Korea, Far East at Krishnapatnam to the final destination of Kolkata and Haldia. Other liners followed suit and soon Hyundai Merchant Marine, Zim, Goldstar, SCI and many NVOCCs (Non Vessel Operating Common Carrier) also began their transshipment operations at Krishnapatnam Port.

NCT at Krishnapatnam Port was the first terminal on the east coast of India chosen by the foreign flag carrier Xpress Feeders of Singapore to deploy a transshipment feeder under the new relaxed regime for transshipment. Xpress now operates 3 vessels from NCT to Kolkata which are specially made for to suit the low water depth at Kolkata port. All the transshipment feeders together offer 5 feeder services per week at NCT, Krishnapatnam. Due to this, transshipment volume at the terminal has grown steadily from 13000 TEUs per month in the first quarter of current financial year to 17, 200 TEUs by the second quarter and now to 19,800 TEUs in the third quarter.