May 31, 2018: Krishnapatnam Port Company Limited (KPCL), the country’s largest all-weather; deep water port, on the east-coast of India, as part of its multi-modal connectivity model has launched a new weekly direct container rail service connecting the country’s central region to the east coast and beyond in association with India’s premier contai 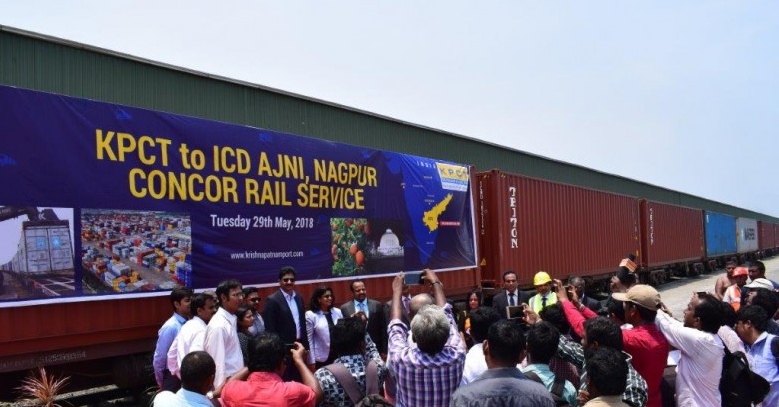 May 31, 2018: Krishnapatnam Port Company Limited (KPCL), the country’s largest all-weather; deep water port, on the east-coast of India, as part of its multi-modal connectivity model has launched a new weekly direct container rail service connecting the country’s central region to the east coast and beyond in association with India’s premier container train operator CONCOR. The inaugural train left from KPCT on 29th May 2018 with a full load of Maersk Line import containers.

Commenting on the occasion Anil Yendluri, CEO, Krishnapatnam Port Company Limited said, “Our new service offering is all set to revolutionise the EXIM trade dynamics for central and east India as shipping over KPCT can reduce atleast one week’s transit time vis-à-vis shipping via west coast ports and with the new freight rail service in place, traders can further rationalise time and costs, availing a direct entry into the port.”

“Nagpur has been one of the most preferred industrial and commercial hubs, the ambitious multi-modal International Cargo Hub and Airport (MIHAN) project has further reinforced investment opportunities for the city. With an excellent rail connectivity partnership with the country’s largest container train operator and excellent east bound and westbound shipping services from the world’s largest liner companies, we look forward to offering the most convenient and trade efficient gateway on the county’s eastern periphery,” he added.

The new service will provide shipping lines, forwarders, tank operators and cargo-owners, a seamless route between Krishnapatnam Container Terminal and central India including Maharashtra, Madhya Pradesh, Chhattisgarh, and Telangana in turn minimising congestion and facilitating swift movement of containers. Empty containers will be made available at ICD, Nagpur for movement to KPCT.

Commenting on the occasion Vinita Venkatesh, Director, Krishnapatnam Port Container Terminal said, “With the excellent rail infrastructure of CONCOR, we offer a fixed day weekly service from KPCT to ICD Nagpur. Further, our logistics arm is able to efficiently road bridge cargoes from ICD Nagpur across central Indian states like Madhya Pradesh. This rail service will enable importers and exporters of central India to benefit by using an east India port for cargoes to/ from China Korea Japan and South East Asia.”

The train service will help customers avail huge savings per cargo container while also eliminating the chances of pilferage which has been a major issue for businesses. Moreover unlike road transport, which involves multiple examinations even after taking prior customs clearance of the containers, the train can directly enter the port without any further examination, benefitting customers.

The new service will feature up to 45 wagons capable of carrying over 90 containers per trip — and will initially run once a week at highly competitive terminal handling charges which will reduce transportation time from 80 hours taken on the road, to just 55 hours. With the custom clearance designed to be executed either at the port or at the ICD basis customers’ requirement and convenience the new service offering is slated to save huge time and costs involved to the EXIM fraternity.

Krishnapatnam port’s strategic location along with its vast hinterland makes it a preferred choice for inter and intra cargo movements originating from the central and southern parts of India. Hitherto import and export cargo shipments from Nagpur have been taking farfetched routes resulting in escalated transport costs while still losing out on time.

The current transit time from China to Nagpur via JNPT on the older routes which ranges between 22 to 25 days can be drastically trimmed down to 15 to 18 days via Krishnapatnam container terminal. Similarly from Yangon to Nagpur via JNPT transit time is 12 to 15 days where as via KPCT transit time is 7 to 10 days thereby providing huge economical and transactional benefits. The port recently announced rise of record 88 percent in its container handling and 25 percent in total cargo handling for FY18.