March 7, 2020: Jawaharlal Nehru Port Trust (JNPT) hosted members of Bombay Chamber of Commerce & Industry (BCCI) to have a dialogue with the end customers to showcase the various Ease of Doing Business (EODB) initiatives taken by port which will significantly benefit in their overall logistics cost reduction. 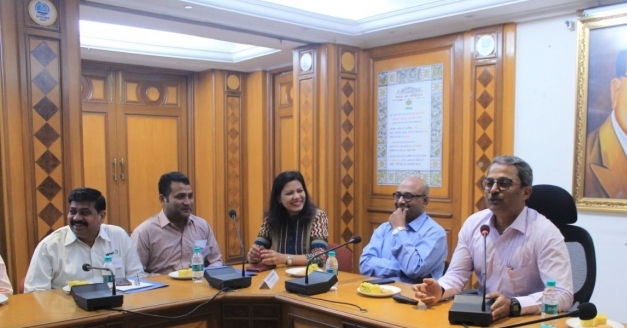 March 7, 2020: Jawaharlal Nehru Port Trust (JNPT) hosted members of Bombay Chamber of Commerce & Industry (BCCI) to have a dialogue with the end customers to showcase the various Ease of Doing Business (EODB) initiatives taken by port which will significantly benefit in their overall logistics cost reduction.

#JNPort hosted delegates from @BombayChamber. They were given a detailed presentation on the ongoing activities being conducted at JNPT under the #EaseOfDoingBusiness initiative followed by a tour of port operational area#BombayChamber pic.twitter.com/ZRrDn5p4Qk

Direct Port Delivery
“DPD has benefitted the trade as there is prompt and timely delivery leading to reduction in inventory costs; saving in transportation costs; saving in handling and storage charges at warehouse and reduction in dwell time for containerized cargo. This tactical initiative is making a significant impact on the end-users by enabling savings in cost ranging from Rs 8,000 to Rs 20,000 per TEU and time saving ranging from 5-7 days,” says the release.

Direct Port Entry
JNPT has also introduced Direct Port Entry (DPE), a facility created exclusively for exporters to bring in the export containers directly to port instead of routing it through CFS. This is saving time of about 1-2 days which in turn is enabling savings in the cost of Rs 2,000 per TEU.

The port has also introduced Inter Terminal movement of Tractor Trailers (ITT) and ITRHO which has further streamlined the movement of containers between the terminals. This has helped in reduction of overall Import Dwell Time by 32.8% from 55.55 hours (Apr-Jan 2019) to 37.33 hours from April-Jan 2020. This system has resulted in the following benefits to transporters/users like turnaround time of trucks is reduced, thereby increasing number of trips between CFSs and Port terminals. Cost of handling is reduced and hence, more containers can be moved in less time. This also helps in optimal use of the TTs thereby easing traffic on the JNPT approach roads.

The delegates were also apprised about the various tech-based initiatives like E-form 13/Form 11, JNPT mobile app, RFID-based terminal Automated Gate System (AGS), RFID-based container tracking system by DMICDC (for the first time in India), e-Delivery of orders, upgradation of the port community system (PCS) to PCS 1X and the Terminal Operating System which has added to the ease in doing business with the port.

The session concluded with a port visit where the delegates saw the available infrastructure and the ongoing capacity-building projects contributing towards the overall maritime trade.