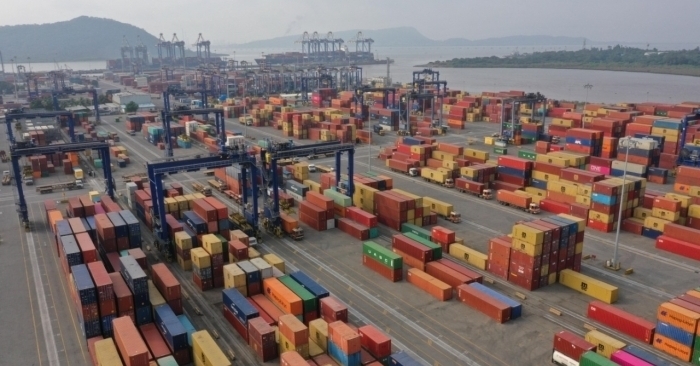 X
JNPT registered a throughput of over 4.7 million twenty-foot equivalent units (TEUs) in container handling as against 5.03 million TEUs during FY 2020.
Our Correspondent5 April 2021 5:15 AM GMT

The total container traffic handled in March 2021 stood at 527,792 TEUs, which is the highest container volume handled in a month, since inception.

JNPT registered a throughput of over 4.7 million twenty-foot equivalent units (TEUs) in container handling as against 5.03 million TEUs during FY 2020. The total traffic handled at JNPT during the financial year 2020-21 is 64.81 million tonnes as against 68.45 million tonnes in FY 2019-20.

Sanjay Sethi, IAS, chairman, JNPT said, “Despite the pandemic, JNPT along with its stakeholders stood up to this challenge, and put up a strong and spirited fight. In a laudable display of team effort, everyone has worked against all odds and helped the port retain its good performance in FY21. JNPT will continue to play an important role and contribute to the nation’s economy by delivering its duties as an important part of the supply chain. Our high-performance numbers are a validation of our continuous efforts to empower trade and make India a foremost player in the global maritime sector”.

JNPT has been working towards facilitating ease in doing business for the Trade. Under this JNPT took a major step by facilitating a new Inter Terminal Route connecting the BMCT Terminal with all the other four Container Terminals of JNPT.

Also during the month, railways undertook a successful trial run of a double-stacked dwarf container train from Mehsana (Gujarat) to JN Port. During the financial year, the port also received the operational status for India’s first port-based special economic zone, JNPT SEZ. Also, JNPT completed the construction of a coastal berth with the capacity to handle 2.5 million tons of coastal cargo including liquid cargo.