Jazeera Airways to fly Delhi-Kuwait-London from Oct. 27 on A320neo 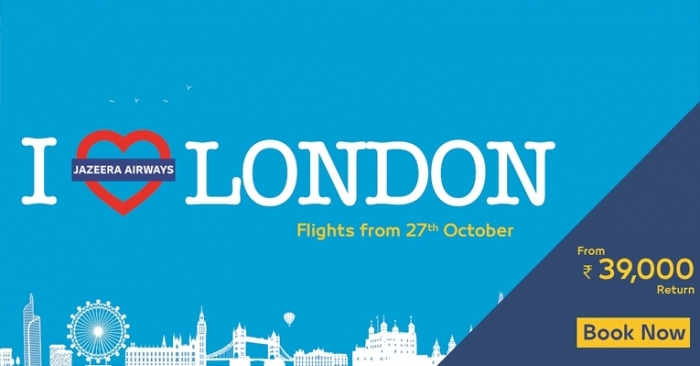 X
According to the airline, this will be the first new service to the UK from Kuwait in 55 years.
Our Correspondent6 Aug 2019 8:30 AM GMT

August 6, 2019: Kuwait's low-cost airline Jazeera Airways will start flying daily to London on October 27, 2019 on its new A320neo aircraft. According to the airline, this will be the first new service to the UK from Kuwait in 55 years.

The flight will leave Delhi at 08.15 hours on Saturdays landing in Kuwait at 10.00 hours local time and connecting with the London flight at 11.00 hours, arriving in London at 15.05 hours. Return flights are available on Mondays, Tuesdays, Wednesdays and Fridays. The London Gatwick Airport South Terminal provides convenient access to the Gatwick Express train that connects passengers to central London.

Marwan Boodai, chairman, Jazeera Airways said, “What better way to continue our expansion in 2019 than to announce London as our first new destination of the year. This is a first for a low-cost carrier in the Middle East to fly long-haul, using our new A320neo aircraft. We are very excited to be providing our passengers with one of the most popular destinations from Kuwait and the region and we expect high demand for the route.”

Commenting on the new service between Delhi and London via Kuwait, Rohit Ramachandran, CEO, Jazeera Airways said, “We are delighted to offer another option to London at great value to our passengers from India. Our London route is a huge milestone for Jazeera Airways as we expand our network further, bringing more choice to travellers to and from India, connecting them to Kuwait and other cities in the Middle East and Europe that are served within our network.”