May 21, 2020: The first of the 12000-horsepower, Prima T8 electric locomotives have been put into commercial service by Indian Railways. 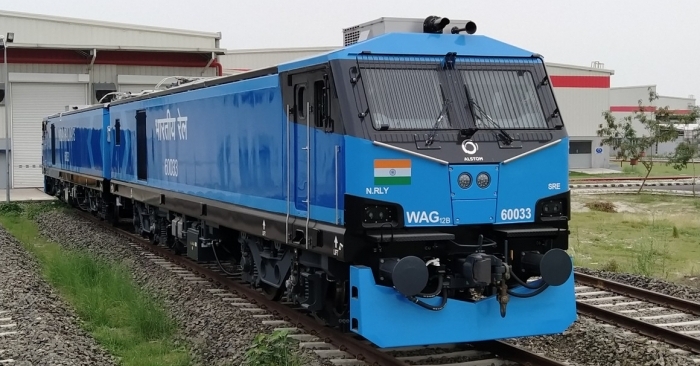 The e-locos will allow faster and safer movement of heavy freight trains, capable of hauling 6000 tonnes at a top speed of 120 km/h. Planned for deployment on Dedicated Freight Corridors (DFCs), they will increase the average speed of freight trains in India by approximately 25 km/h. Equipped with Insulated Gate Bipolar Transistors (IGBT) propulsion technology, the e-locos will also allow considerable savings in energy consumption thanks to the use of regenerative braking.

“Alstom is very pleased to be delivering these electric locomotives to Indian Railways. The introduction of the Prima locomotives into the IR fleet demonstrates our commitment to the country. This revolutionary product which will be faster, safer and more environmentally friendly, and it will help write a new chapter for India’s sustainable mobility journey. We are immensely proud to be a partner in this,” said Ling Fang, senior vice president, Alstom Asia-Pacific.

Made in Bihar, the loco comes with modern and powerful features which will transform freight transportation pic.twitter.com/9KWT3HNTFd

In line with the Make-in-India mandate, all the 800 Prima locomotives are being manufactured locally. Designed at Alstom’s Engineering Centre in Bengaluru, the Prima T8 WAG-12 are being built in one of India’s largest integrated greenfield manufacturing facilities at Madhepura in Bihar. Spread across 250 acres, with a production capacity of 120 locomotives per year, the Madhepura site is built to international standards of safety and quality. Two ultra-modern maintenance depots in Saharanpur and Nagpur will ensure the high service availability of the locomotives. The Saharanpur depot is already operational and the one in Nagpur is under construction. Equipped with the latest features, these depots will play a critical role in maintaining India’s most advanced freight locomotives at significantly lower costs.

As part of the largest Foreign Direct Investment (FDI) project of Indian Railways, in 2015 the Ministry of Railways and Alstom signed a contract worth €3.5 billion (INR 25,000 crore) and created a joint venture for the project. The contract allowed for the manufacture of 800 double-section, 12000-horsepower electric locomotives for freight service and associated maintenance for a period of 11 years. The scope also included the set-up of a manufacturing plant at Madhepura (Bihar) for building the e-locos and two maintenance depots at Saharanpur (Uttar Pradesh) and Nagpur (Maharashtra). A true embodiment of India’s vision, the project will create more than 10,000 direct and indirect jobs in the country (primarily in the states of Bihar, Uttar Pradesh and Maharashtra).