September 24, 2020: During April to June quarter of 2020, the Indian containerised trade contracted by almost 30 percent as compared to the same period last year, exports out of India were down by over 24 percent while imports suffered a greater shock with a fall of almost 34 percent, noted Maersk India Trade Update for April-June quarter. 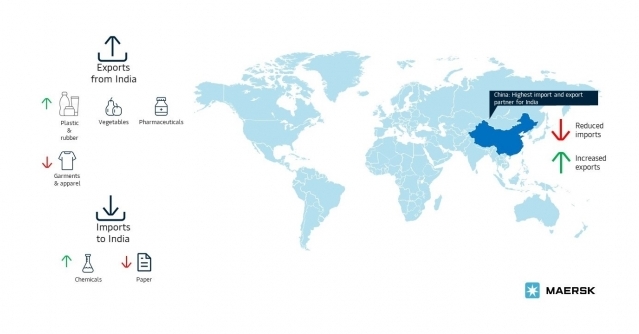 X
Despite the overall drop in exports from India, commodities such as plastic " rubber have been in great demand and their exports during Apr-Jun quarter.
Our Correspondent24 Sep 2020 9:51 AM GMT

September 24, 2020: During April to June quarter of 2020, the Indian containerised trade contracted by almost 30 percent as compared to the same period last year, exports out of India were down by over 24 percent while imports suffered a greater shock with a fall of almost 34 percent, noted Maersk India Trade Update.

V-shaped recovery of exports
Despite the overall drop in exports from India, commodities such as plastic & rubber have been in great demand and their exports, especially to China have seen tremendous growth, up by 70 percent, during this quarter. The plastic industry has a huge potential with the growth of end-user industries such as packaging, textile fibre and electronics. At the same time, the tyre industry is one of the rare sectors which has not seen as much contraction as the others, giving a boost to the rubber exports.

Vegetable exports have also seen a rise, especially to markets in the Middle East. Vegetable exports to the UAE have more than doubled in the said period as compared to 2019. The agricultural sector is expected to grow by 3 percent in 2020-21 while exports are expected to grow between 4 to 6 percent with minimal impact of Covid-19 pandemic. The major contribution to the growth in agricultural produce can be attributed to increase in rice sowing which has been up by almost 20 percent than last year. The Indian government is focusing on transport and warehousing infrastructure in order to encourage agricultural produce and this will help in boosting export trade further.

Although pharmaceuticals constitute smaller portion of overall exports out of India, there is a huge scope for growth of the sector which is least impacted due to Covid-19. The Indian pharmaceutical industry is expected to grow around 10 percent to 12 percent in the next couple of years owing to the efforts taken by the department of pharmaceuticals which aims to make the country a hub for end-to-end drug discovery under its ‘Pharma Vision 2020’.

Garments & apparel contribute highly to the exported commodities from India and these faced a great demand-shock from the western markets during a good part of the first half of the year. However, as the retail markets around the world have started opening, the demands are increasing and steep recovery in exports can now be seen.

Imports expect L-shaped recovery
The containerised imports into India witnessed a great decline across all commodities, except for chemicals which form a very small portion of overall imports. Paper, appliances & kitchenware and metal imports have slid to almost half volumes in the quarter as compared to 2019.

Hike in import duty, import dependence on China and production stoppage across the country has hit imports in the short term. While there is an expectation of the import market to recover in 2021, it will surely be a long-drawn-out process that is further slowed down by the government’s Atmanirbhar campaign.

Simplifying Indian logistics
Steve Felder, Managing Director, Maersk South Asia, said, “The shipping and logistics sector remained operational despite tremendous disruptions brought about by the Covid-19 pandemic. Fully understanding the importance of the sector and its criticality to keep the global economy functioning, there is a need to invest even more in digitising trade. The crisis has only accelerated this transformational need and it is imperative that digital solutions are supported and encouraged. Besides digital transformation, what the logistics sector really needs is agility and reduction of inefficiencies. Supply chains are complex by nature; however, we need to simplify them by focusing on customer needs and building solutions with a straightforward goal of reducing complexities. What is also extremely important is to reduce the cost of logistics in India which stands at around 14 percent as compared to 9-10 percent in more developed countries.”