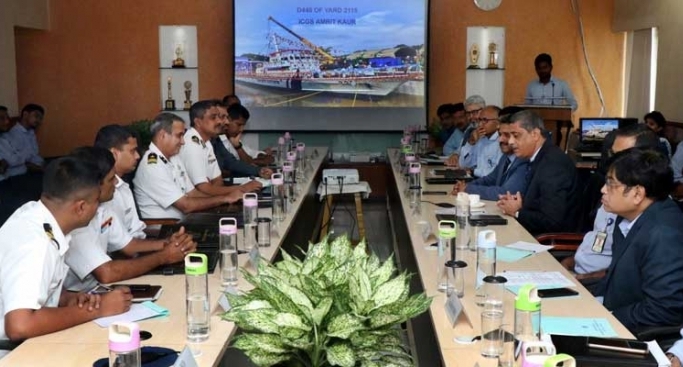 X
This is the third in the series-of-five Fast Patrol Vessel (FPV) that the miniratna-category-1 warship building company under the Ministry of Defence is building.
Our Correspondent20 Nov 2019 12:37 PM GMT

This is the third in the series-of-five Fast Patrol Vessel (FPV) that the miniratna-category-1 warship building company under the Ministry of Defence is building. Earlier, GRSE delivered its 101st Warship ICGS Annie Besant, second in the series to the Indian Coast Guard, in November 05, 2019.

Make in India
Rear Admiral Vipin Kumar Saxena tweeted that the achievement signifies the efforts of GRSE to boost ‘Make in India’ initiative. Make in India is a scheme launched by Prime Minister Narendra Modi in 2014 to push companies to have their products in Indian soil and devote investments for manufacturing.

The protocol of delivery and acceptance was signed between Rear Admiral V K Saxena, IN (Retd.), chairman & managing Director, GRSE and commanding officer of the vessel, Commandant (JG) Himanshu Mishra.

ICGS Amrit Kaur
The FPV is a medium-range surface vessel with a length of 50 metres, width of 7.5 metres and displacement of around 308 tonnages and is capable of operations in the maritime zones of India. These powerful, fuel-efficient platforms are designed to perform multipurpose operations like patrolling, anti-smuggling, anti-poaching and rescue operations. The vessel is designed for a maximum speed of 34 knots with an endurance of more than 1500 nautical miles.

She is prepared with 03 main engines of MTU make and built up at GRSE with advanced control systems, ‘Water Jet’ units and an ‘Integrated Bridge System’ integrating all communication and navigation systems. The ship is also fitted with 40/60 gun as the main armament and will also have improved habitability features with fully air-conditioned modular accommodation for 35 people. The whole plan of these FPVs has been developed by GRSE as per the demands of the Indian Coast Guard.