September 17, 2019: Delivery drone service Zipline is expanding to India, with a partnership with the government of Maharashtra to use its autonomous logistics network to deliver emergency medicines and critical care in the state. 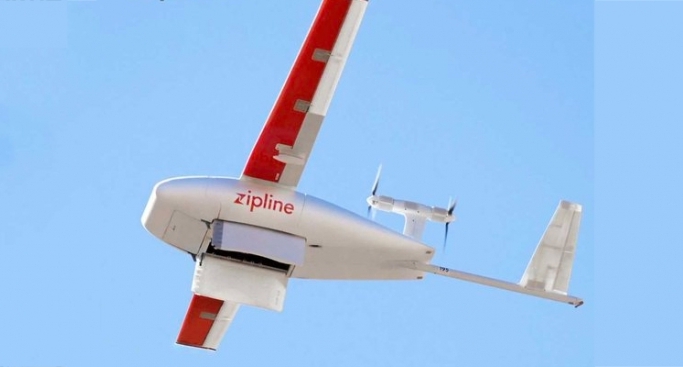 September 17, 2019: Delivery drone service Zipline is expanding to India, with a partnership with the government of Maharashtra to use its autonomous logistics network to deliver emergency medicines and critical care in the state. In the first phase of operations, two distribution centres located near Pune and Nandurbar will be established to service public health facilities in those regions beginning in early 2020.

The initiative is supported through a grant by Cyrus Poonawalla Group's Serum Institute of India (SII), the world's largest vaccine manufacturer by number of doses produced and sold globally. Zipline drones will make on-demand and emergency deliveries of blood products, vaccines and life-saving medications.

The service is the government of Maharashtra's bold vision of using drone delivery to establish universal, seven-days-a-week access to lifesaving and critical medicines for each of its 120 million citizens over the coming years.

"Maharashtra has one of the best health care systems in India. But while we celebrate our successes, we must also recognise that we have much more work to do to create universal access to critical healthcare for all," said Maharashtra chief minister Devendra Fadnavis. "This new emergency drone delivery service is a great solution to deliver vaccines, blood and other lifesaving products instantly when time is of essence. It will help ensure that millions of people in Maharashtra will always get the care they need," added Fadnavis.

Keller Rinaudo, founder and CEO, Zipline called Maharashtra "one of the most dynamic and innovative states in India" in a Twitter post. Rinaudo also thanked Adar Poonawalla, CEO of the Cyrus Poonawalla Group for his belief in the project.

On Friday, Zipline signed a partnership with Maharashtra, one of the most dynamic and innovative states in India, to build 12 distribution centers and serve 130m people. So excited to be working with to @CMOMaharashtra, @SerumInstIndia, @AyushmanNHA https://t.co/JRpJFxHuUO

SII was founded by Adar's father Dr Cyrus Poonawalla in 1966 with the aim of manufacturing life-saving immuno-biologicals.

And special thanks to the visionary @adarpoonawalla, who believed in this project before anyone else and is donating his own financial resources to people of Maharashtra to make it possible

"Millions of people across the world die each year because they can't get the medicine they need when they need it. Instant drone delivery can help solve that problem. We're proud to partner with the government of Maharashtra and The Serum Institute of India to ensure that millions of people have on-demand, instant access to the blood, vaccines and critical medicines they need to stay healthy and alive," said Rinaudo.

Will Hetzler, co-founder, head of US business development at Zipline said in a LinkedIn post: "Zipline is expanding to India! In partnership with the Government of Maharashtra, Zipline will launch in early 2020, with the ultimate goal of putting all 120 million of the state's citizens within range of lifesaving deliveries by drone."

"At SII, we are committed to ensuring full immunisation cover and better healthcare solutions for citizens across the country. With this association and the support provided by the government of Maharashtra as well as the technological advancements provided by Zipline, we hope to create deeper impact and extend immunization cover in the state, bringing our vision to life," said Adar Poonawalla.

Zipline transports life-saving medicines to Rwanda and Ghana. On September 15, the drone delivery service passed a big milestone of making 20,000 deliveries to patients across the two African nations.

Passed a big milestone today: 20,000 deliveries to patients across Rwanda and Ghana pic.twitter.com/S4rZeQr73a

Last week, the California-based Zipline welcomed rock band U2 frontman and philantrophist Bono on its board of directors.

Zipline's technology is designed and tested in Half Moon Bay, California. They conduct extensive flight testing in Davis, California, and have teams of local operators all over the world. Zipline's other investors include Sequoia, A16Z, GV, Temasek, TPG, Baillie Gifford, and Katalyst Ventures.