The Union Minister of Shipping and Road Transport and Highways Nitin Gadkari has said that the government is committed to create the right environment for promoting cruise tourism in the country. Speaking at Dawn of Cruise Tourism in India, said that India has a huge potential of hosting nearly 40 lakh cruise tourists. 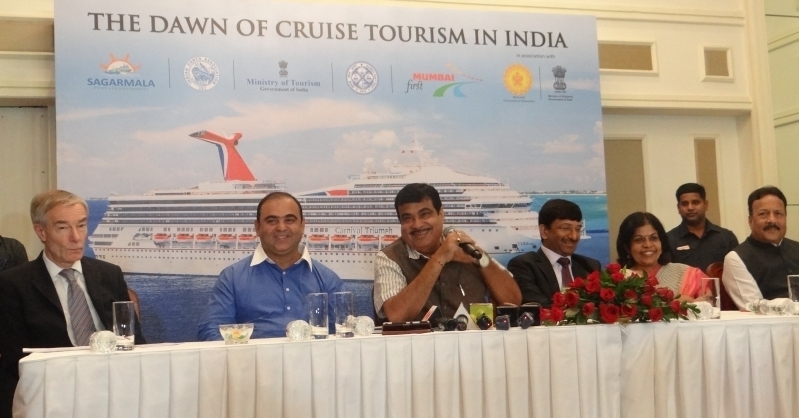 August 08, 2017: The Union Minister of Shipping and Road Transport and Highways Nitin Gadkari has said that the government is committed to create the right environment for promoting cruise tourism in the country. Speaking at Dawn of Cruise Tourism in India, said that India has a huge potential of hosting nearly 40 lakh cruise tourists. Given the right impetus, the number of tourist ships visiting India can go up from the present 158 to about 955 per year.

The Union Minister expressed confidence that the cruise tourism sector would be a game-changer for domestic as well as international travellers. The sector is estimated to have a revenue potential close to Rs 35,000 crore, and is expected to create over 250,000 jobs.

Gadkari informed that the Ministry of Shipping has already embarked upon reforms to boost cruise tourism. Absence of world class infrastructure and lack of defined procedures for various government departments/agencies for dealing with cruise vessels and tourists have been identified as major hurdles in the growth of cruise tourism. To address this, a task force comprising all relevant agencies like port, immigration, customs, port health authorities and security agencies was formed to study the present environment and procedures. Global consultant, Bermello & Ajamil was hired to bring about a holistic approach and suggest the way forward.

The key items that the studies have identified for success of cruise tourism include creating and developing the right market atmosphere, easy immigration process, security procedures that do not impede movement, taxation regime that allows for a platform for growth, Customs & Duties procedures that do not tie the industry, internationally comparable tariffs, port and tourism infrastructure that meets the needs of the cruise lines and visitors today and tomorrow.

To achieve this the studies have recommended single window system for all pre cruise requirements for cruise operators to save time , separate dedicated approach road and entrance to the cruise terminals, uniform and consistent security procedures by CISF at all ports, coordination between immigration and CISF, training all departments dealing with cruise tourism with Standard Operating Procedures (SoPs) for better handling of passengers, use of technology in clearances, providing passenger manifest to CISF , implementation of green lane/red lane at existing terminals with random custom checking as is done in the airport, declaration of only limited items of inventory of the cruise ships in place of the existing requirement of having the complete inventory for all the stocks in the ship.

Various steps have already been taken for growth of cruise tourism. These include finalization of SoPs for handling cruise vessels and passengers, allowing foreign flag vessels carrying passengers to call at Indian ports without obtaining license from DG (Shipping), Constitution of Port-level Committees to address manpower, coordination and logistics issues. A discount of 40 percent is being given at Major Ports in Port charges. Additional rebate of 25 percent for home port cruise vessels in addition to 40 percent rebate for coastal cruise transportation. E-visa facility and e- landing card has been extended to five major ports. Uniformity in port charges for cruise vessels at all Major Ports. About Rs 1,600 per person as against earlier practice of charging per tonnage of ship. The charges are now comparable to Singapore and other global ports for cruise tourism.

New cruise terminal is being created at Mumbai at a cost of Rs 300 crore. Tender has been awarded for civil construction of terminal building. There are plans to develop more port destinations other than the five ports of Mumbai, Goa, New Mangalore, Cochin and Chennai.