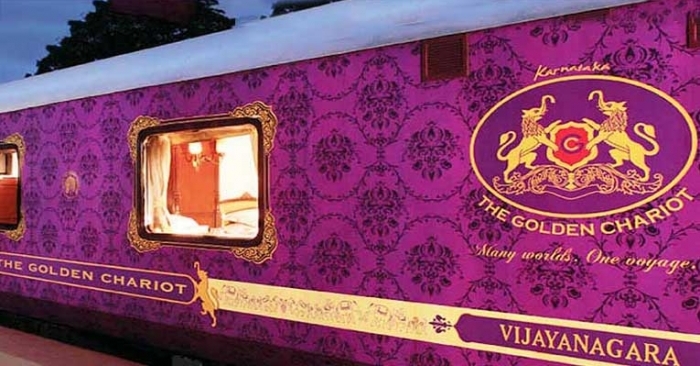 X
The luxurious train that started running in 2008 was suspended due to huge losses.
Our Correspondent19 Nov 2019 1:02 PM GMT

The luxurious train that started running in 2008 was suspended due to huge losses. The train is a Karnataka government initiative in a joint venture with the ministry of railways. The 18 coach long train with 44 guest rooms having a capacity of 84 guests, covers tourist attractions in the state of Karnataka and other south Indian states.

Suresh C. Angadi, Minister of State of Railways, said “This MoU is an important step towards the Prime Minister Narendra Modi’s vision to promote tourism in India and his clarion call to the countrymen to visit at least fifteen tourism spots in the country.”

Angadi directed the IRCTC and KSDTC to keep the price of the tickets competitive so that the common people can also avail the facility of this train. He added that this train will boost tourism in Southern India.

The Golden Chariot Train, traversing through Karnataka and Goa, redefines train travel to provide an enhanced experience for all the passengers.

Karnataka State Tourism Development Corporation will soon hand over the reins of the train to IRCTC. IRCTC is planning a revamp of the train itineraries also to add different flavours that Karnataka has to offer. The new itineraries shall be a mix of history, culture, wildlife and nature. It is proposed to include Bandipur, Mysore, Halebid, Chikmagalur, Hampi, Bijapur and Goa in the itinerary. IRCTC is expected to carry out the internal refurbishment of the train and commence operations from March 2020.

C.T. Ravi, Minister of Tourism, Government of Karnataka, said that Government of Karnataka and KSTDC have been operating and maintaining Golden Chariot since its inception in 2008 and it is the first and only luxury train in the whole South India. The Golden Chariot showcases the rich culture and heritage of the region. He said that MoU between IRCTC & KSTDC will have mutual benefit for both the organizations and tourism will be strengthened through this partnership.

Vinod Kumar Yadav, chairman, Railway Board, expressed confidence that IRCTC and KSTDC will successfully operate and market the Golden Chariot for domestic and international tourists. He assured all cooperation and necessary support to this project.