April 4, 2019: Demand for air freight in the global market, measured in freight tonne kilometers (FTKs), waned 4.7 percent in February 2019, compared to the same period in 2018, according to data released by The International Air Transport Association (IATA). 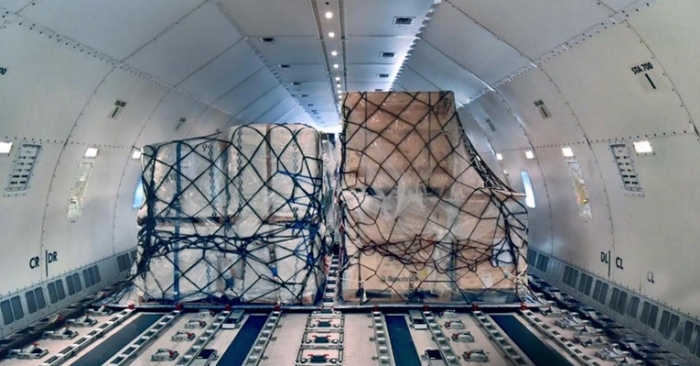 April 4, 2019: Demand for air freight in the global market, measured in freight tonne kilometers (FTKs), waned 4.7 percent in February 2019, compared to the same period in 2018, according to data released by The International Air Transport Association (IATA). This was the fourth consecutive month of negative year-on-year growth and the worst performance in the last three years.

Freight capacity, measured in available freight tonne kilometers (AFTKs), rose by 2.7 percent year-on-year in February 2019. This was the twelfth month in a row that capacity growth outstripped demand growth.

Trade tensions weighing on the industry; weakening global economic activity and consumer confidence; and the drop in global export orders since September 2018 according to the the Purchasing Managers Index (PMI) for manufacturing and export orders, have been taking a toll on the demand for air cargo. 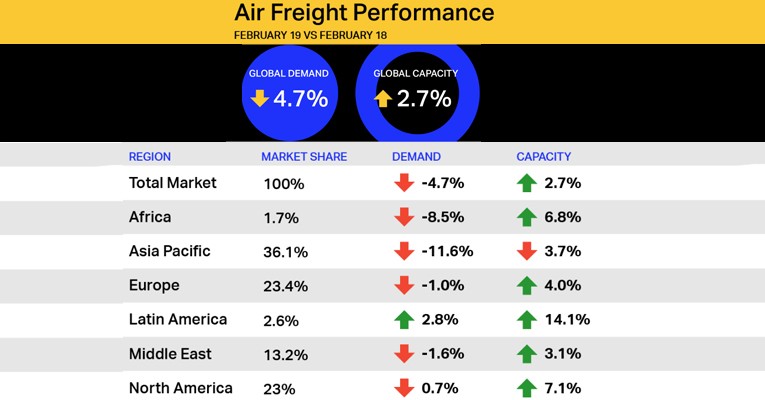 “Cargo is in the doldrums with smaller volumes being shipped over the last four months than a year ago. And with order books weakening, consumer confidence deteriorating and trade tensions hanging over the industry, it is difficult to see an early turnaround. The industry is adapting to new markets for e-commerce and special cargo shipments. But the bigger challenge is trade is slowing. Governments need to realize the damage being done by protectionist measures. Nobody wins a trade war. We all do better when borders are open to people and to trade,” said Alexandre de Juniac, IATA’s Director General and CEO.

All regions reported a contraction in year-on-year demand growth in February 2019 except for Latin America.

Asia-Pacific airlines saw demand for air freight contract by 11.6 percent in February 2019, compared to the same period in 2018. Weaker manufacturing conditions for exporters in the region, ongoing trade tensions and a slowing of the Chinese economy impacted the market. Capacity decreased by 3.7 percent.

North American airlines saw demand contract by 0.7 percent in February 2019, compared to the same period a year earlier. This was the first month of negative year-on-year growth recorded since mid-2016, reflecting the sharp fall in trade with China. North American carriers have benefited from the strength of the US economy and consumer spending over the past year. Capacity increased by 7.1 percent. 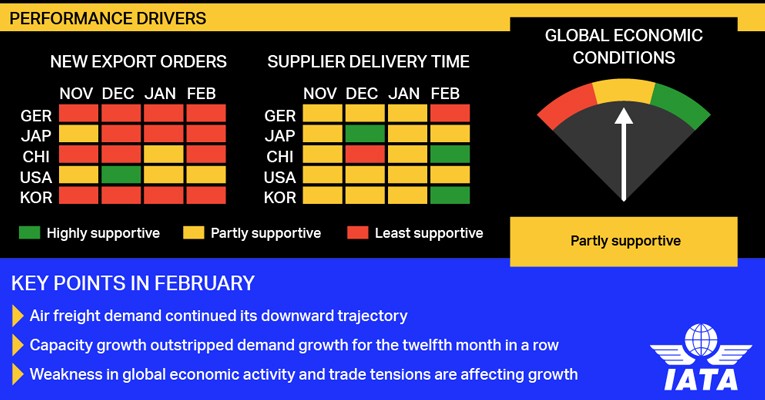 European airlines experienced a contraction in freight demand of 1 percent in February 2019 compared to a year ago. The decline is consistent with weaker manufacturing conditions for exporters in Germany, one of Europe’s major economies. Trade tensions and uncertainty over Brexit also contributed to a weakening in demand. Capacity increased by 4 percent year-on-year.

Latin American airlines posted the fastest growth of any region in February 2019 versus last year with demand up 2.8 percent. Despite the economic uncertainty in the region, a number of key markets are performing strongly. Seasonally-adjusted international freight demand achieved growth for the first time in six months. Capacity increased by 14.1 percent.

African carriers saw freight demand decrease by 8.5 percent in February 2019, compared to the same month in 2018. Seasonally-adjusted international freight volumes are lower than their peak in mid-2017; despite this, they are still 25 percent higher than their most recent trough in late-2015. Capacity grew 6.8 percent year-on-year.