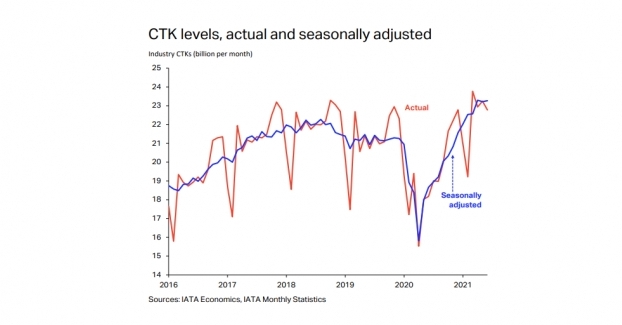 X
Overall capacity, measured in available cargo tonne-kilometers (ACTKs), remained constrained at 10.8 percent below pre-Covid-19 levels (June 2019) due to the ongoing grounding of passenger aircraft.
Our Correspondent30 July 2021 9:44 AM GMT

Overall capacity, measured in available cargo tonne-kilometres (ACTKs), remained constrained at 10.8 percent below pre-Covid-19 levels (June 2019) due to the ongoing grounding of passenger aircraft. Belly capacity was down 38.9 percent on June 2019 levels, partially offset by a 29.7 percent increase in dedicated freighter capacity.

Willie Walsh, IATA’s Director-General, said, “Air cargo is doing brisk business as the global economy continues its recovery from the Covid-19 crisis. With first-half demand 8 percent above pre-crisis levels, air cargo is a revenue lifeline for many airlines as they struggle with border closures that continue to devastate the international passenger business. Importantly, the strong first-half performance looks set to continue.”