April 30, 2020: The global air cargo demand, measured in cargo tonne-kilometres (CTKs), fell by 15.2 percent in March compared to the previous year (-15.8 percent for international markets) while the demand for pharmaceutical shipments that are critical to fighting Covid-19, according to the data released by the International Air Transport Associat 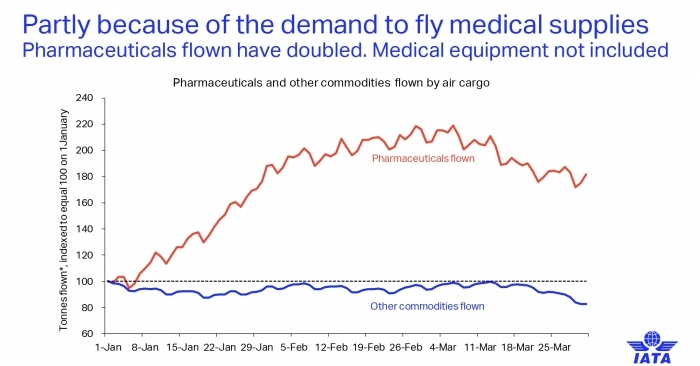 X
Belly capacity for international air cargo shrank by 43.7 percent in March compared to the previous year.
Our Correspondent30 April 2020 10:32 AM GMT

April 30, 2020: The global air cargo demand, measured in cargo tonne-kilometres (CTKs), fell by 15.2 percent in March compared to the previous year (-15.8 percent for international markets) while the demand for pharmaceutical shipments that are critical to fighting Covid-19, according to the data released by the International Air Transport Association (IATA).

Air #cargo is suffering a severe capacity shortage. Global capacity has shrunk by close to 23% in March, compared to 2019.

Airlines are doing their best to meet demand with various methods, but are facing bureaucratic hurdles.

“At present, we don’t have enough capacity to meet the remaining demand for air cargo. Volumes fell by over 15 percent in March compared to the previous year. But capacity plummeted by almost 23 percent. The gap must be addressed quickly because vital supplies must get to where they are needed most. For example, there is a doubling of demand for pharmaceutical shipments that are critical to this crisis. With most of the passenger fleet sitting idle, airlines are doing their best to meet demand by adding freighter services, including adapting passenger aircraft to all-cargo activity. But mounting these special operations continues to face bureaucratic hurdles. Governments must cut the red tape needed to approve special flights and ensure safe and efficient facilitation of crew,” said Alexandre de Juniac, IATA’s Director General and CEO.

There are still too many examples of delays in getting charter permits issued, a lack of exemptions on COVID-19 testing for air cargo crew, and inadequate ground infrastructure to/from and within airport environments. Air cargo needs to move efficiently throughout the entire supply chain to be effective. IATA urges governments to:

Slow Recovery
While there is an immediate capacity shortage, the collapsing economy is expected to further depress overall cargo volumes.

The short-term analysis shows that global manufacturing activity continued to contract in March as government-imposed lockdowns caused widespread disruptions. Following the sharp decline in February – which exceeded that of the global financial crisis – the global manufacturing Purchasing Managers’ Index (PMI) rose slightly in March but remained in contractionary territory. This improvement was due to the stabilization of the China PMI; excluding the China outcome, the global index fell to its lowest level since May 2009.

Looking at the prospects for the rest of 2020, the World Trade Organization forecast gives little indication of a quick recovery. The optimistic scenario is for a 13 percent fall in trade in 2020, while the pessimistic scenario sees a 32 percent fall in trade in 2020. This will deeply impact air cargo’s prospects.
One area of demand, however, is growing sharply. Pharmaceutical shipments are tracking at double previous-year volumes. This excludes shipments of medical equipment.

“The capacity crunch will, unfortunately, be a temporary problem. The recession will likely hit air cargo at least as severely as it does the rest of the economy. To keep the supply chain moving to meet what demand might exist, airlines must be financially viable. The need for financial relief for airlines by whatever means possible remains urgent,” said de Juniac.