February 6, 2020: The union cabinet, chaired by Prime Minister Narendra Modi, has given 'in-principle' approval with Rs 51000 crore investment for setting up a major port at Vadhavan in Maharashtra on Februry 5. 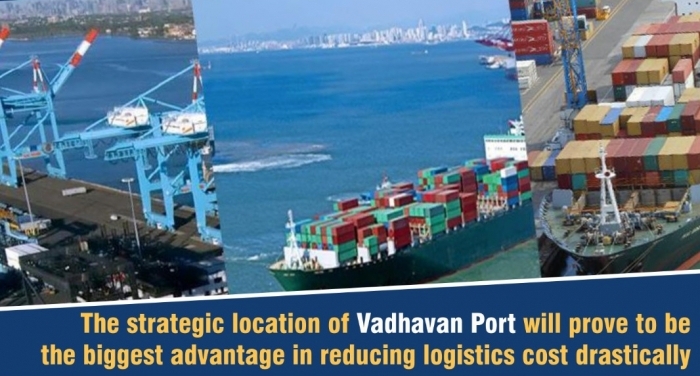 X
Let us lend our ears to the words of minister for shipping Mansukh Mandaviya and the PIB press release.
Our Correspondent6 Feb 2020 11:02 AM GMT

February 6, 2020: The union cabinet, chaired by Prime Minister Narendra Modi, has given 'in-principle' approval with Rs 51000 crore investment for setting up a major port at Vadhavan in Maharashtra on February 5. The total cost of the construction of India’s 13th major port is estimated at around Rs 65,544.54 crore.

Let us lend our ears to the words of minister for shipping Mansukh Mandaviya and the PIB press release.

1. Dependency on Sri Lanka and Singapore

“Due to the lack of a deep seaport with 20 metres draft, mother-vessels coming to India from anywhere in the world has to unload its cargo at transhipment ports like Colombo (15 metres depth) or Port of Singapore (12 metres) to load them into small ships and then sail it to Indian ports like JNPT (11 metres depth). Since India’s 90 percent EXIM moves through the ocean, it is a great inconvenience for exporters and importers. India is in a real need for a new port in the west coast with 20 metres depth as container cargoes are increasing,” said Mansukh.

The ever increasing size of container ships also makes it imperative that a deep-draft container port on the west coast of India is developed. The Vadhavan port has a natural draft of about 20 meters close to the shore, making it possible for it to handle bigger vessels at the port. Development of Vadhavan port will enable call of container vessels of 16,000 - 25,000 TEUs capacity, giving advantages of economies of scale & reducing logistics cost. The world's largest container-handling modern deep draft ports require a draft of 18 metres – 20 metres.

Situated 190 kilometres north to JNPT, 180 kilometres south to Surat and 160 kilometres west to Nashik, the government doesn’t have to acquire any private land because all the 3000 hectares need for the port belongs to the government already. The port will be just 12 kilometres from the upcoming Delhi-Mumbai Freight Corridor, 34 kilometres away from Delhi-Mumbai National Highway (NH-8) and 22 kilometres from Mumbai Baroda Express Highway. The port will facilitate the EXIM needs of all companies situated in Vapi Industrial Area in Gujarat to Indore Industrial Area in Madhya Pradesh and from Northern Karnataka to Maharashtra.

“Western coast of India, right now, has a capacity to handle 18 million TEUs every year with JNPT and Mundra ports handling most of it. All the ports including JNPT have reached a level of saturation with a steady increase of container cargoes compared to bulk and liquid cargoes. By 2030, India should have a capacity to handle 25 million TEUs,” he added.

“Increasing containerization of cargo in the wake of the value-added manufacturing sector makes it important to prepare our port infrastructure for handling value-added import and export to facilitate manufacturing activity. Container traffic in the JNPT hinterland is expected to grow from 4.5 MTEUs currently to 10.1 MTEUs by 2022-25 when JNPT's potential will be fully exhausted. The demand for container traffic will further accelerate after the plans for improving logistics infrastructure fructify and the 'Make in India' push drives greater exports and manufacture sourcing to India,” says the release.

4. India wants to own a top 10 container port

How it will be done?

Vadhavan port will be developed on "landlord model". A Special Purpose Vehicle (SPV) will be formed with Jawaharlal Nehru Port Trust (JNPT) as the lead partner with equity participation equal to or more than 50% to implement the project. The SPV will develop the port infrastructure including reclamation, construction of the breakwater, besides establishing connectivity to the hinterland. All the business activities would be undertaken under PPP mode by private developers.

Gearing up to cater world's largest container handling, long felt need for a modern deep draft (18-20 M) port on Western Coast has been fulfilled with approval of Vadhavan Port. The decision for 'No Private Land Acquisition' during Port development stage is also noteworthy. pic.twitter.com/aD7qNbvJqe