January 29, 2018: Lokpriya Gopinath Bordoloi International Airport is set to get a New Integrated Terminal Building by 2021. 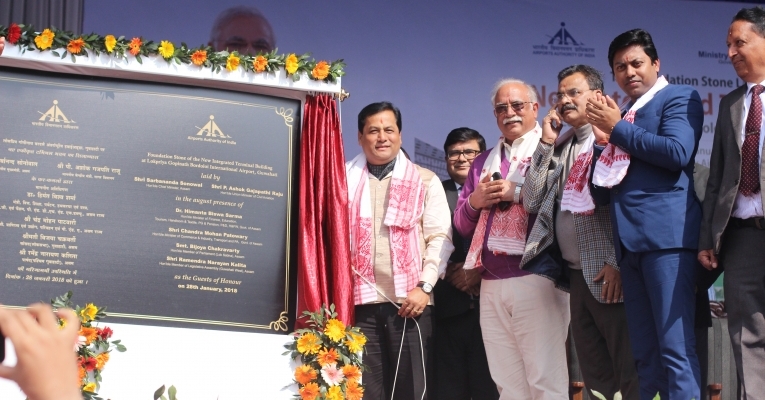 January 29, 2018: Lokpriya Gopinath Bordoloi International Airport is set to get a New Integrated Terminal Building by 2021. The foundation stone for the building, which will be built at a cost of Rs 1, 232 crores, was laid by Union Minister for Civil Aviation Ashok Gajapathi Raju and Assam chief minister Sarbanada Sonowal.

The proposed New Integrated Terminal Building spread over 90000 square metre will be equipped with world-class passenger facilities and will have the capacity to handle 3100 passengers during peak hour. The interiors of the building will depict local handicrafts, murals and popular tourist destinations of Assam.

The new terminal building will conform to GRIHA (Green Rating for Integrated Habitat Assessment) 4-Star rating. The infrastructure will have green areas within and outside connecting passengers to nature. A small internal forest feature, bamboo artifact and a craft village are integrated into the overall design, highlighting the rich ethos and culture of the Northeastern region of India.

An efficient solid waste management system, reuse of treated water for flushing and horticulture purpose, rain-water harvesting with sustainable urban drainage system and use of efficient water fixtures would be a few other green features of the project.

While addressing the audience during the ceremony, Raju said that the new building is going to comply with all prevalent green-features and will help cater to the expanding air traffic from the region.

Commenting on the airport project being handled by the Airports Authority of India, Sonowal said, “Guwahati, the largest city of Assam and North East of India, and one of the fastest growing cities in India is on its way to transform into a smart city. Today is an important day for Guwahati and Assam. The new airport being constructed by AAI will surely meet the futuristic demands of Guwahati and will further add to the infrastructural development of this expanding city.”