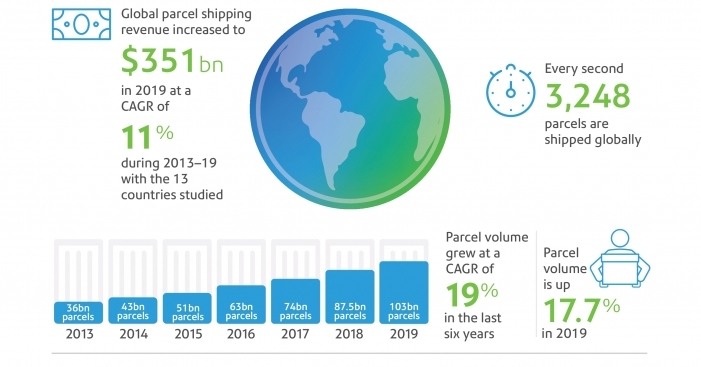 More than three of every five parcels shipped in the world’s major markets are generated by China. Over 3000 parcels were shipped every second in 2019 in the world’s 13 major markets. The report forecasts parcel volume is most likely to more than double and reach 220-262 billion parcels by 2026, with a 14.8 percent CAGR for 2020-2024. Due to the uncertainty in the market fueled by the global pandemic, the forecast provides a range that shows volumes could be as low as 200 billion or as high as 316 billion parcels in six years.

On average, 3,248 parcels were shipped every second in 2019 in the world’s 13 major markets, equating to an average of 27 parcels shipped per person. China remains the strongest influence on the market with 63.5 billion parcels shipped in 2019 and an increase of 26 percent in parcel volume year-over-year.

India has the third highest percentage increase after China and Norway, experiencing growth of 19 percent in parcel volume, shipping 2.8 billion parcels and reaching a CAGR of 22 percent since 2013.

Since the outbreak of the Covid-19 pandemic and complete lockdown during March till May 2020, the Indian e-commerce and parcel delivery sectors were severely hit as the government allowed e-commerce companies to fulfill only essential orders such as groceries, medicines etc. In mid of May, the Indian government allowed the e-commerce firms to resume full operations, which led to a surge in volume. We expect to see these volumes reflected in next year’s index.

The report highlights that the Indian parcel volume is growing significantly and has reached 3 billion, experiencing YoY growth of 19 percent. Indian e-commerce sector is growing significantly and has witnessed a growth rate of 31.9 percent in 2019 to reach $42 billion. This growth is majorly fueled by the increased penetration of smartphones and internet services in Tier 2 and 3 cities, introduction of cash-on-delivery, easy return policies, and faster delivery options. Retailers like Amazon, Alibaba, Walmart and international carriers like DHL, FedEx are expanding their operations and investing in innovations to meet the growing parcel deliveries.

Amazon Transportation parcel volume delivery grew by 54.5 percent YoY in 2019 and replaced BlueDart as the second largest carrier in 2019. Recently, Amazon announced that it is planning to add five new sortation centers and expand the existing eight sortation centers in the country. With this expansion the company aims to strengthen its delivery speed and connectivity of customers & sellers. In January 2020, Amazon India announced its plan to deploy 10k EVs (electronic vehicles) by 2025, as an integral milestone to become an energy efficient courier.

Paytm Mall on the other hand is said to be planning to launch a single-day delivery pilot with its existing delivery partners and Gati. Delhivery announced investment up to ₹3 billion to expand its trucking infrastructure such as increasing fleet size and setting up trucking hubs in the next 2 years.