May 30, 2018: Ganesh Kumar Gupta, President, FIEO said that despite increasing protectionism, global economic growth is looking promising in 2018. Indian exports, which are hovering around $300 billion, should exhibit 15-20 percent growth so as to reach around $350 billion during the current fiscal. 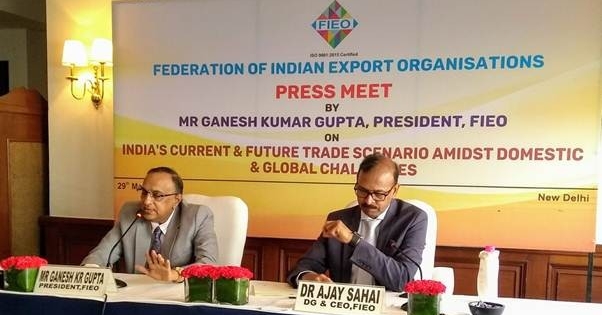 May 30, 2018: Ganesh Kumar Gupta, President, FIEO said that despite increasing protectionism, global economic growth is looking promising in 2018. Indian exports, which are hovering around $300 billion, should exhibit 15-20 percent growth so as to reach around $350 billion during the current fiscal. The northward movement in petroleum and commodity prices would also add to export growth. The recent depreciation of Indian Rupee is also supporting exports though its impact varies from sector to sector and from company to company.

Gupta also said that there is a need to identify the champion sectors and provide fiscal and non-fiscal support for them so that exports could be increased both in advanced and emerging economies. A product market mix strategy will help in increasing exports exponentially.

FIEO feels that government will pro-actively engage with our trading partners particularly with US so that the trade interest of the country is safeguarded.

While growth in exports in 2017-18 has helped in creating additional jobs in the sector, the performance of some of the labour intensive sectors like apparel, leather, carpets, handicraft, gems & jewellery, etc. has definitely dented the job creation opportunities in these sectors.

The FIEO president said that liquidity is a major area of concern particularly for MSME exporters who constitute the bulk of exports in high employment intensive sectors. The challenges on GST front are continuing though the fortnight clearance drive, which was highly successful, gave us the hope that refund will be provided on real time basis. While claims over Rs 7000 crore were cleared during March, 2018, the amount in April, 2018 is little over Rs 1000 crore. As per our estimate, refund over Rs 20,000 crore are pending on account of IGST and ITC and many exporters have not been able to file the refund of ITC due to technical glitches as input tax credit and exports happened in different months. The GST refund process has considerably slowed down after the clearance fortnight. FIEO urges the Finance Minister to look into the refund problem and organise a clearance drive to liquidate the pendency and bring the refund process on track. Majority of the problems relates to ITC refund, which have to be done by the states as well. The manual intervention in the refund process has added to the transaction time and cost of exporters.

The major challenge lies due to reasons such as the process of ITC refund is partly electronic and partly manual which is cumbersome and adds to the transaction cost; the tax authorities are reluctant to accept the applications and raise piecemeal objections asking for irrelevant documents including copy of bank realisation certificate; the refund formula to apply for refund for a relevant period has not been modified in the software so a large number of exporters could not file their claim for ITC refund; the tax authorities have not been trained in GST law, rules and regulations delaying the refund of exporters; the process which requires the State Authorities to process the refund of SGST and forward it to Central Authority for payment of CGST and vice-a-versa is quite time consuming; in many cases, while one authority has sanctioned the component of tax under its jurisdiction, the other authority either delayed it or yet not issued it; and the provision that 90 percent of ITC refund will be issued within 7 days is not being implemented by tax authorities. Some of the states say that they do not have funds to clear the ITC refund.