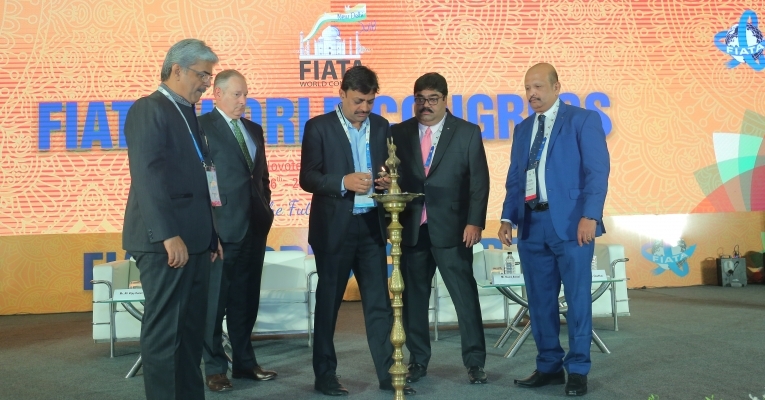 September 26, 2018: The FIATA World Congress 2018 (FWC-2018) has kick started in New Delhi, with the theme ‘The Future Starts Here’. Hosted by the Federation of Freight Forwarders’ Associations in India (FFFAI), the event is being attended by 1200 delegates from more than 130 countries and India.

Welcoming the delegates Vijaykumar said, “India after a long wait of over 50 years is privileged to host for the first time FIATA World Congress this year. We are proud of this combination of FFFAI and FIATA to be the partners of globally the most significant logistics event.”

He pointed out that the economic might of a nation is defined by its logistics capabilities and the success of any industry is measured by the capacity to have a seamless supply chain management. There have been significant changes in the method of the logistics service and the scope of activities are ever expanding.

“Global slowdowns and stunted economic progress are not deterrent to growth. On the contrary they are the cornerstones of innovation and redefining movement of revolutionary changes. It is a wakeup call for course correction, to shift gear and explore new avenues. For the past years, world has become a vortex of uncertainties and thus is a challenge. This has compelled the industry to deliberate new ideas, new approaches and to be relevant in the industry,” he added.

In his inaugural speech as chief guest, Bansal underscored India’s growing economic scenario and capacity building exercises from the Government of India as well as private players, especially for physical infrastructure of port, airport, highways, railways, hinterland connectivity, coastal shipping, inland waterways, etc. He also highlighted the crucial policy initiatives from the Government of India to facilitate ease of doing business and international trade in consultation with industry players.

Dutta conveyed his gratitude for the remarkable support FFFAI received from the government, its various departments and industry stakeholders. “We are excited to announce that FWC-2018 registered close to 1200 delegates from across the world, which is indicating a remarkable sign considering the growth of future logistics industry in India. The theme of FWC 2018 ‘The Future Starts Here’ was very apt if the responses FFFAI received is taken into account,” added Dutta.

During the FWC-2018 there would be about 20 business sessions, which are being attended by some 70 eminent speakers from international logistics industry, apart from representatives from Government of India, WCO, renowned personalities, etc. In addition there are about 1000 scheduled B2B meetings scheduled for more than 500 delegates.

Commenting on the impact of this mega show which is full with business interactions and amusement programmes, Shah maintained that it would not only boost up traditional companies, it also inspires start-ups and young entrepreneurs.

At this event FFFAI also organised an exhibition in which about 60 exhibitors from logistics industry participated. The inauguration ceremony was followed by main forum session. In addition, there were regional sessions to discuss issues and opportunities in Americas, Asia Pacific, Africa & Middle East, Europe and India.