March 1, 2021: The drones for maritime logistics company F-drones today announced its success in raising its seed capital led by Eastern Pacific Shipping (EPS), an international ship management company, along with participation from the Schulte Group, a shipowner and manager with over 135 years of experience, through its venture arm - Innoport, 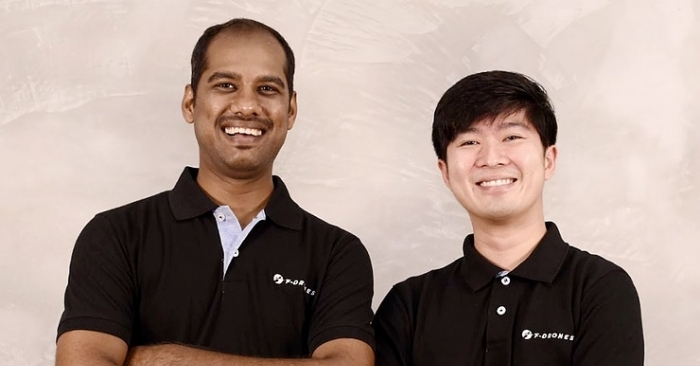 March 1, 2021: The drones for maritime logistics company F-drones today announced its success in raising its seed capital led by Eastern Pacific Shipping (EPS), an international ship management company, along with participation from the Schulte Group, a shipowner and manager with over 135 years of experience, through its venture arm - Innoport, SEEDS Capital, Entrepreneur First, Orient Ventures, Superangel and a few Singapore based angel investors.

F-drones is the first company in the world to provide 24/7 commercial Beyond-Vision-Line-Of-Sight (BVLOS) drone deliveries to ships. It is developing the Hyperlaunch Heavy (HLH), a fully electric and autonomous proprietary drone, capable of delivering 100kg payloads over 100km.

Yeshwanth Reddy, co-founder of F-drones, said, "We are very excited to be able to close the round with more capital than we initially intended. This demonstrates the industry's confidence in our capability and vision to make maritime logistics more efficient, sustainable and safe. The capital will enable us to grow our team, accelerate our technology development and bring an unparalleled solution to market faster."

Gil Ofer, special advisor for innovation at Eastern Pacific Shipping, said, "EPS is proud to lead F-drones' first seed round. We firmly believe they will reinvent the shore-to-ship delivery process by being faster, cheaper, and cleaner than any existing model in use today. F-drones also adds an urgent layer of safety for seafarers and service providers by limiting human contact for routine deliveries. We see F-drones as pioneers in an emerging space which has immense potential and we are excited to be part of their journey."

F-drones' development has also been supported by various government agencies, including the Maritime and Port Authority (MPA) and Civil Aviation Authority of Singapore (CAAS). Its flight tests originally started at Marina South Pier and operations have now expanded to serve a larger area.

Thomas Ting, chief technology officer, MPA, said, "As a key maritime hub, we support maritime technology start-ups which push the envelope driving the next phase of Maritime Singapore's industry transformation. By providing an enabling environment for solution providers to testbed within our waters and trial new technologies and systems for maritime operations, we accelerate the translation of new technologies into commercial-ready solutions. MPA is glad to be able to support tech start-ups such as F-drones to take their solutions to market at a faster pace."

At present, F-drones is conducting test flights on Hyperlaunch, a scaled-down version of HLH, capable of delivering 5kg loads over 50km, which in itself is a notch above most delivery drones in the market now. It is planning to start test flights to ships in Singapore later this year, and commence commercial drone deliveries with Hyperlaunch soon after. The funding would enable the company to form more technology and commercial partnerships and hire global talent in aircraft design, avionics, autonomy and computer vision.