A bumper Hilsa export bounty has been recently announced by the Bangladesh government as a goodwill gesture towards India, since its Hilsa export ban in 2012. 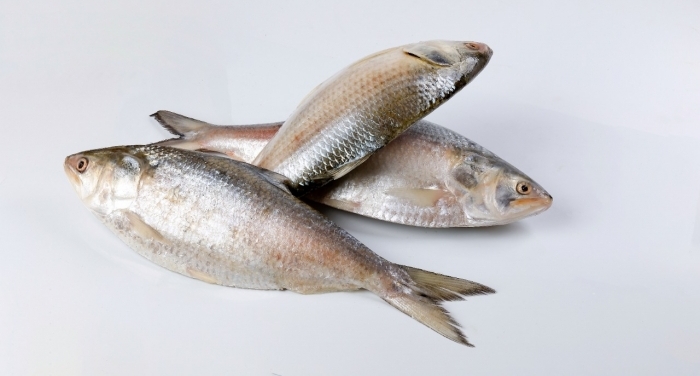 September 28, 2021: This September a rare and special cargo is busy making its way on the backs of scores of trucks through the roads of the Petrapole border -located between India and Bangladesh.

The cargo in question is none other than the King of fish ‘Hilsa’ which is a much sought-after variety in the Indian subcontinent, thanks to its scarcity on the Indian waters and the success of Bangladesh’s fishing bans and conservation plan that centres around increasing the Hilsa production.

The cargo is also ‘special’ after the Bangladesh government as a goodwill gesture announced a temporary lift on its ban on Hilsa exports and allowed a ‘special permission’ to 116 Bangladeshi exporters to export a total of 4,640 tonnes of Hilsa in two phases from September 22. This is the largest export volume being allowed as part of a friendly Hilsa diplomacy being practised between these two nations, after declining Hilsa numbers led Bangladesh to ban its Hilsa exports from 2012. It later put in place a sustainable conservation plan that has swung back the Hilsa production fortunes and achieved self-sufficiency.

“In the first phase govt permitted 53 exporters and then again it allowed 63 more exporters, thereby allowing a total of 4,640 tonnes of Hilsa exports which is a substantial haul.”
Shyamal Das, M U Sea Foods

Kazi Belayat Hossein, president of the Bangladesh Frozen Foods Exporters Association (BFFEA) told Indian Transport and Logistics News (ITLN), “While Hilsa fish is currently a banned export item, this is a gift from our prime minister Sheikh Hasina who has given special permission in lieu of upcoming Durga Puja festival in West Bengal when the fish is widely consumed. Initially, our government allowed 53 exporters with special permission to export 40 tonnes of raw Hilsa fish each up to October 5, 2021. The Hilsa will be sent on trucks along with ice by exporters, wherein each truck can carry anywhere between 5-8 tonnes of raw Hilsa fish that are packed inside insulated boxes. These goods will also go through all regular commercial customs clearances and procedures while being cleared at the Petrapole border.”

Catching the much-touted and loved Hilsa is no simple affair! After an intense 12-14 hours of ‘day fishing’ beginning in the wee hours of early morning, Bangladeshi fishermen bring the prized Hilsa catch to local markets in the evening, where they are auctioned to local exporters. The exporters then pack it in ice, inside insulated boxes and send the shipments to Kolkata by trucks. These trucks undertake anywhere from 200 to 600 km journey across a day or two days to deliver the Hilsa in time to satiate the Bengali palates on this side of the border.

While Hilsa fishing was earlier limited to 3-4 villages, conservation efforts have yielded good results, what with Hilsa fishing encompassing several parts of towns and districts of Bangladesh including Chittagong, Barisal, Monpura, Samraj, Bhola, Patuakhali, Cox’s Bazaar, Khulna, Bagerhat, Dhalchar among others. The ban on Hilsa fishing and exports was introduced in 2012 by the Bangladeshi government to protect fragile Hilsa fishing. There are two official fishing ban periods enforced by the Bangladesh Government and the upcoming 22-day ban begins from October 4, 2021.

“Hilsa should now be made a regular export item as the sustained increase in production has led to the local prices going down in Bangladesh, making it time to restart Hilsa exports.”
Abdul Matlub Ahmad, India Bangladesh Chamber of Commerce and Industry

Shyamal Das, MD of M.U Sea Foods in Jashore, Bangladesh will be exporting close to 80 tonnes of Hilsa to India. Das told ITLN, “In the first phase government permitted 53 companies or exporters to process 40 tonnes of fish each, then again on Thursday afternoon government has published a revised one further allowing 63 more exporters to export Hilsa to India, thereby allowing for a total of 4,640 tonnes of Hilsa exports during this period that is a substantial haul.”

While the fish is consumed across many parts of India, it has cultural significance for the people of West Bengal, who also use it in religious rituals like the Saraswati and Ranna Puja. The Durga Puja festivities are slated to begin on October 11 and continue till October 17. The Bangladeshi Hilsa began to be imported into India after the decline in Hilsa production on the Indian side (West Bengal) of the Bay of Bengal, thanks to overfishing and declining Hilsa stock. Last year despite the Covid-19 pandemic, around 1850 metric tonnes (MT) of Hilsa made its way to India compared to 500 MT in 2019. The craze for the fish had hit a peak last year when the Border Security Force (BSF) had seized close to 2,800 kg of smuggled Bangladeshi Hilsa at the Kalyani border outpost.

Such is the success of Bangladesh’s fishing bans and conservation plan that Bangladeshi exporters are now rallying for their government to lift the export ban altogether. Abdul Matlub Ahmad, president of India Bangladesh Chamber of Commerce and Industry (IBCCI), said, “Since the production of Hilsa has increased in the past 5-8 years, we are, in fact, advocating via various levels of the government to remove the ban on Hilsa exports as Bangladesh is now self-sufficient in Hilsa production. It should now be made a regular export item as the sustained increase in production has led to the local Hilsa prices going down in Bangladesh, thereby making it an opportune time to restart Hilsa exports.”

Roadblocks ahead
However, the current Hilsa consignment seems to be in troubled waters after importers and exporters, and trade bodies on both sides of the border sounded an alarm at the huge mismatch between the amount of cargo promised and the short transit time frames being allowed. Many importers believe that the ‘Durga Pujo special Hilsa export’ announcement from Bangladesh was delayed this year by a fortnight. Further many claim that customs clearances at the Petrapole border sometimes easily last up to 12-14 hours, which further ends up slowing the process.

In Kolkata, Syed Anwar Maqsood, secretary of the West Bengal Fish Importer’s Association has warned that the delivery of these Hilsa export volumes was next to impossible. He said, “This year the Hilsa exports began from September 22, 2021, onwards, which was a delayed start. Even if landing time improves, we cannot exceed exports of more than 1,000 tonnes of Hilsa in this timeframe. Before the ban in 2012, we would import 5,000-6,000 tonnes in one season which stretched from 4-6 months. Now we are expected to import the same commodity for which we would take 5-6 months in 10 days’ time. How is it possible?”

Maqsood told ITLN that he has written to the Bangladesh PMO, commerce minister, their foreign affairs ministry and even made presentations to Bangladesh high commissioner regarding the oversight and asked for a 2-month extension, but to no avail. “Every day, not more than 50-60 tonnes can be exported at most meaning the current Hilsa consignment may not touch even 1,000 tonnes. While the goodwill gesture of friendship is great, we have written and requested the Bangladeshi side to lift the ban for a month or two so that we can bring in the entire consignment. In fact, even if we get two months of time, we will be able to fulfil only about 2,000 tonnes of Hilsa imports which is still a great outcome.” he added.

The Hilsa is currently sold at $10 per kg in Bangladesh, while it is sold for ₹900 for a kg and ₹1400 for 1.5 kg in the wholesale market of Howrah, while retail prices maybe 20 percent higher. Interestingly the Indian government had dropped the 30 percent import duties on Hilsa exports from Bangladesh back in the ’90s, while importers currently pay 5 percent on Hilsa exports from Myanmar, Maqsood added.