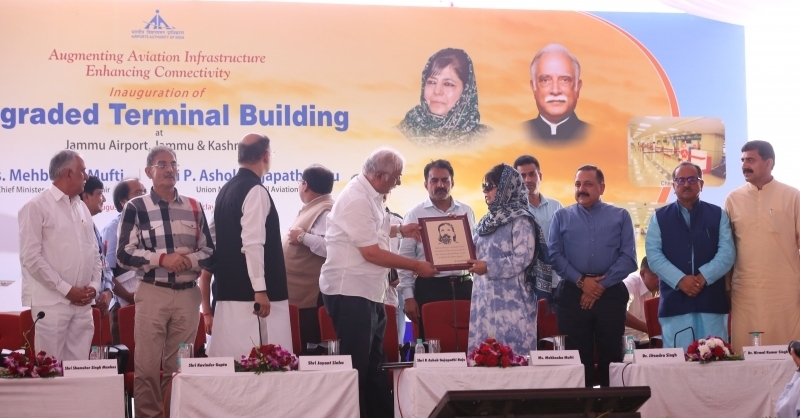 Jammu Airport belongs to the Indian Air Force, Ministry of Defence and AAI maintains a Civil Enclave for civil aircraft operations. During the year 2016-17, passenger traffic movement at Jammu Airport reached 1.16 million and the passenger growth rate has touched 29 percent in the first quarter of 2017-18. To cope with the increasing passenger growth and demand, expansion and upgradation of existing Terminal Building of Jammu Airport has been completed. The area of the Terminal Building is expanded from 6700 square metres to 14,500 square metres with an upgraded peak hour handling capacity of 720 passengers at a time, an increase from the existing 360 peak hour passengers.

For safety and security of passengers, Terminal Building is equipped with Fire Fighting and Fire Alarm System, CCTV and Baggage Scanners etc. There is a provision for installation of three Passenger Boarding Bridges with Advanced Visual Docking Guidance System (AVDGS) for the Terminal which would increase operational efficiency besides convenience to passengers.

While inaugurating the upgraded Terminal Building, Ashok Gajapathi Raju said, “We believe in augmenting infrastructure of our airports to enhance connectivity. With the upgraded Jammu Airport, we would be better prepared to give improved services to air travelers visiting this city of temples.”