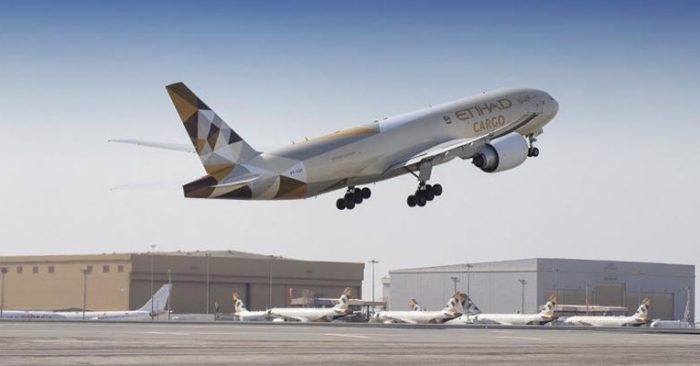 X
Each aircraft will provide capacity for 12 Lower deck pallets and four containers, carrying up to 45 tonnes of payload
Our Correspondent26 March 2020 1:17 PM GMT

March 26, 2020: Etihad Cargo today announced its initial plan to operate 34 weekly cargo flights to ten global destinations including India using its Boeing 787-10 passenger aircraft in addition to its Boeing 777F freighters.
The passenger freighter network will introduce capacity into India, Thailand, Singapore, Philippines, Indonesia, South Korea and other places where borders remain open for cargo. On top of that, the current freighter schedule will be enhanced by additional flights into Riyadh, London, Hong Kong and Shanghai.

“To complement its fleet of Boeing 777 Freighters, Etihad Cargo is introducing a fleet of Boeing 787-10 aircraft as passenger freighters to operate 34 weekly flights, serving 10 markets initially. Each aircraft will provide capacity for 12 Lower deck pallets and four containers, carrying up to 45 tonnes of payload,” says the release.

By utilising the Boeing 787 in addition to its freighter fleet, Etihad Cargo will ensure the continuity of vital imports into the UAE including fruits, vegetables, meat, medical supplies, mail and e-commerce.

Abdulla Mohamed Shadid, managing director cargo and Logistics at Etihad Aviation Group, said: “As the national carrier to the UAE, Etihad is working closely with the UAE government to ensure the country is well served and the needs of the people residing in the UAE are unaffected while continuing to play our role as a facilitator of global trade between the East and the West.”

“In the current environment and as per our leadership’s guidance, it is essential these trade lanes remain open, and with the addition on this capacity we can serve those constrained markets that face decreased passenger freight operations, offering a strategic cargo lifeline and supporting the continuity of the global trade ecosystem,” he said.