October 22, 2020: Emirates SkyCargo today announced that it is creating the world’s first and largest GDP complaint dedicated airside cargo hub for the storage and distribution of potential Covid-19 vaccine in Dubai. 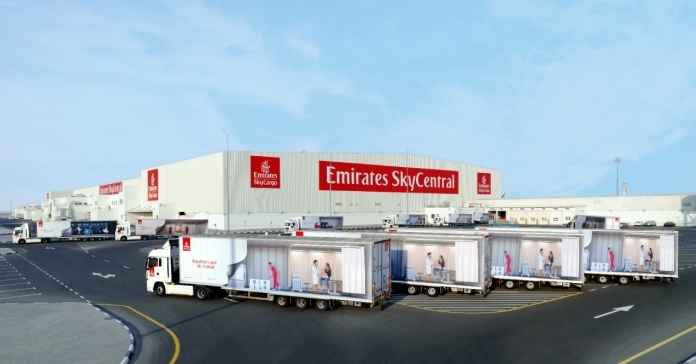 X
Emirates has also set up a dedicated rapid response team to coordinate requests and streamline the carrier%u2019s response to vaccine transportation requests.
Our Correspondent22 Oct 2020 11:02 AM GMT

October 22, 2020: Emirates SkyCargo today announced that it is creating the world’s first and largest GDP complaint dedicated airside cargo hub for the storage and distribution of potential Covid-19 vaccine in Dubai.

“It will be re-opening its Emirates SkyCentral DWC cargo terminal in Dubai South to serve as a dedicated anchor hub for cold chain storage and distribution of the vaccine,” said the release.

The freight division of Emirates has also set up a dedicated rapid response team to coordinate requests from international vaccine distribution partners and to streamline the carrier’s response to vaccine transportation requests.

HH Sheikh Ahmed bin Saeed Al Maktoum, Chairman and Chief Executive, Emirates, said, “Dubai is well-positioned to serve as a gateway and distribution hub for Covid-19 vaccines to the rest of the world. We have the infrastructure and logistics connections, and a geographic location that puts markets representing more than two-thirds of the world’s population within an 8-hour flying radius. Through our investment in capabilities and processes for the transport of temperature-sensitive pharmaceuticals, Emirates SkyCargo has managed to position Dubai amongst major global pharmaceutical customers as the preferred point of transit.”

Emirates SkyCargo vaccine hub
Emirates SkyCentral DWC has over 4,000 square metres of temperature controlled GDP certified dedicated pharma storage area allowing for large scale storage and distribution of the potential Covid-19 vaccines. Overall, it is estimated that the facility can hold around 10 million vials of vaccine at a 2-8 degrees Celsius temperature range at any one point of time.

The infrastructure at Emirates SkyCentral DWC is also complemented by one of the world’s largest fleet of Cool Dollys helping protect temperature-sensitive cargo during transit between the aircraft and cargo terminal. Additionally, the availability of a large number of temperature-controlled trucking docks and the proximity of the terminal to the aircraft parking gates will ensure rapid and efficient clearance of cargo for further distribution.

In addition to cold storage, Emirates SkyCargo will also offer dedicated zones for value-added services such as re-icing and repackaging of vaccines for global distribution for its customers.

Emirates’ pharma transportation capabilities
Since 2016, the air cargo carrier has invested in its capabilities for the transportation of temperature-sensitive pharmaceuticals. This included the introduction of a specialised product – Emirates Pharma - and the development of dedicated GDP certified ‘fit for purpose’ infrastructure pharma both at Dubai as well as at major origin and destination points under its pharma corridors programme that currently covers more than 30 cities. Emirates SkyCargo has moved more than a quarter-million tonnes of pharmaceutical cargo in the last four years.

With its fleet of modern and efficient all wide-body aircraft and a network that currently spans more than 130 destinations across six continents, combined with the strategic geographic location of its Dubai hub, Emirates SkyCargo will be able to rapidly move vaccine shipments from manufacturing sites to the vaccine hub and then onwards to the rest of the world on a combination of scheduled and passenger flights.