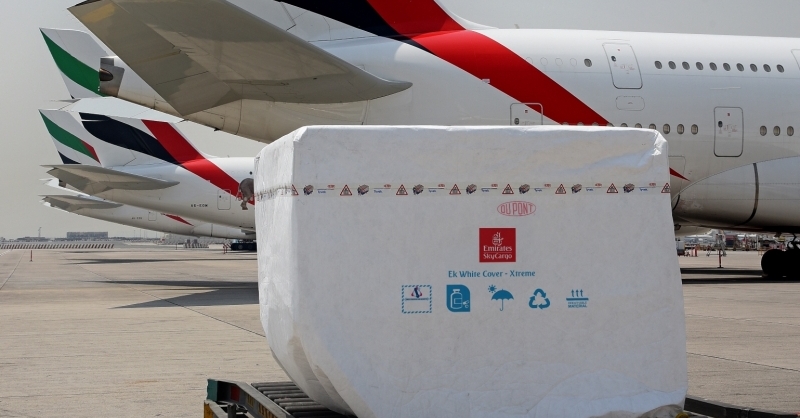 Over the last few years, Emirates SkyCargo has been working with DuPont to build its portfolio of lightweight thermal cargo covers which offer an effective first level of protection for cargo against external heat and weather fluctuations.

The cargo division of Emirates introduced ‘White Cover Advanced’ in April 2016 which followed on the earlier success of its ‘White Cover’ solution. ‘White Cover’ is primarily used for protecting perishables such as fruits and vegetables having a higher temperature tolerance, whereas ‘White Cover Advanced’ is used for securing packaged pharmaceuticals shipments which are more susceptible to increase in heat. The new White Cover Xtreme will help shield temperature sensitive shipments, including pharmaceuticals, which travel through extreme and variable weather conditions from origin to destination.

Emirates SkyCargo is the first air cargo carrier globally to be introducing DuPont’s Tyvek Xtreme W50 material in its White Cover protection solutions focused on ground handling. Working together with the world’s leading air cargo carrier with a global network of over 155 destinations, DuPont gets critical feedback to refine the research and development for new products & solution in cargo cool chain. The two companies worked extensively on ground trials for White Cover Xtreme and roll out for customers will begin in late August 2017.

The collaboration between Emirates SkyCargo and DuPont on the new White Cover Xtreme is part of an existing agreement between the two companies to develop new temperature protection solutions, in particular thermal covers, for the air cargo industry. The agreement was renewed for a further period of two years until 2019 during the Air Cargo Europe event in Munich in May this year. The agreement allows the players to continue developing cost-effective innovative end to end protection solutions for temperature sensitive cargo keeping in mind the needs of the end customers.

From June to August 2017, Emirates SkyCargo has also been offering complimentary White Covers to all customers who have temperature sensitive perishables consignments transiting through Dubai to better protect cargo from spoilage during summer. On an average over 30,000 tonnes of perishables from different parts of the world transit through Dubai every month on Emirates SkyCargo.