May 4, 2020: Emirates SkyCargo has flown its Boeing 777-300ER passenger aircraft on April 23, 2020, from Mumbai to Dubai loaded with 66 tonnes cargo in the lower deck to register a new record in maximum weight carried in this aircraft belly space. 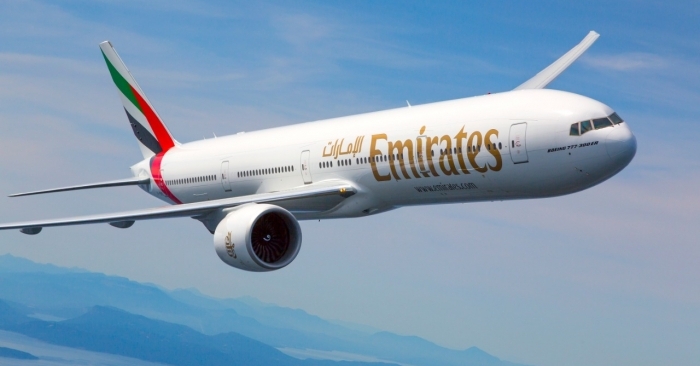 X
The aircraft carried 66 tonnes cargo on April 23 from Mumbai to Dubai setting a new world record.
Reji John4 May 2020 5:47 AM GMT

May 4, 2020: Emirates SkyCargo has flown its Boeing 777-300ER passenger aircraft on April 23, 2020, from Mumbai to Dubai loaded with 66 tonnes cargo in the lower deck to register a new record in maximum weight carried in this aircraft belly space. The cargo carried was a mix of general cargo, perishables and sanitisers. The cargo was loaded on 12 pallets and six containers.

As the Covid-19 pandemic continues its rampage across the globe grounding more than two-thirds of the passenger fleet, scramble for air freight capacity continues unabated. Cargo divisions of airlines are quickly turning ideas into practical applications to provide maximum capacity on, what is now called, “cargo-only passenger flights”.

For Emirates SkyCargo, the cargo division of Dubai-headquartered Emirates, it has been a season of setting new world records breaking its own records.

In the last week of March, this year Emirates SkyCargo set a new world record for maximum cargo loaded in the lower deck of a Boeing 777-300ER passenger aircraft for the first time. On its flight from Karachi (Pakistan) to Dubai, it loaded just over 62 tonnes. On the same route, Emirate SkyCargo operated two more flights on 10 April and 15 April breaking its own record created on the same route by carrying 63 tonnes and 62.7 tonnes respectively.

Nabil Sultan, divisional senior vice president, Cargo, Emirates gives complete credit to his teams at these stations for such incredible works. “It is how well trained the staff at the station. It shows the quality of people we have on the ground. You need the capability to build the unit most efficiently and be able to take advantage of every single inch in the aircraft. The learning has been incredible even for us,” Sultan in an exclusive interview referring to the first record set on the Karachi-Dubai route.

According to official specifications detailed by the Boeing and Emirates, the B777-300 and 300ER are capable of carrying approximately 21 tonnes of cargo in addition to a full passenger load that could range from 312 to 440 passengers in a typical one-class configuration to three-class configuration. Of course, the records are created on “cargo-only passenger flights” which do not carry passengers in the Covid-19 pandemic.