Bernhard Simon, the CEO and the chairman of the Executive Board at Dachser, in an exclusive interview speaks about how the 87-year-old and fully family-owned logistics company is making every effort showcase itself as a technological trendsetter in the logistics industry; but never without being humane. 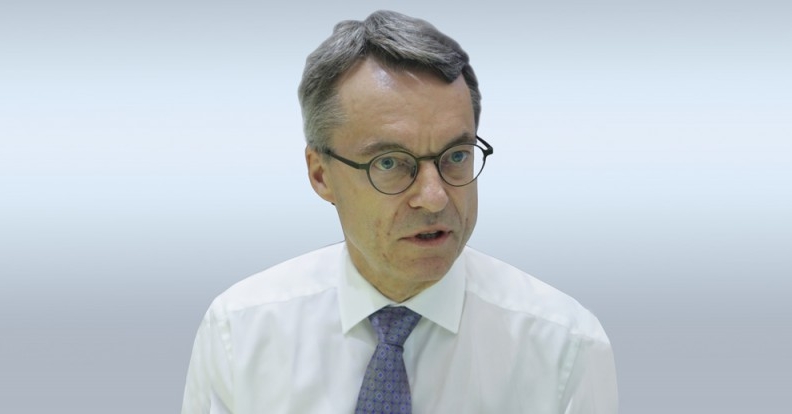 Bernhard Simon, the CEO and the chairman of the Executive Board at Dachser, in an exclusive interview speaks about how the 87-year-old and fully family-owned logistics company is making every effort showcase itself as a technological trendsetter in the logistics industry; but never without being humane.

While unveiling the iPad 2 to the world in March 2011, late Steve Jobs said: “It is in Apple’s DNA that technology alone is not enough — it’s technology married with liberal arts, married with the humanities, that yields us the results that make our heart sing.” Perhaps, platitudes like these are so common in Silicon Valley and among business leaders who frequently launch products in front of mass audience with such lofty language.

But for Dachser, the 87-year-old and fully family-owned global logistics company, it is guided by the incomparable sense of “us” that has been working favourably for such a long time.

“With digitalisation we need to have even more human relations; in fact more valuable ones,” says Bernhard Simon, the Chief Executive Officer and the chairman of the Executive Board at Dachser. “There is too much hype in the development of digitalisation in logistics and there are people who say we don’t need humans any more. Everything can be done by robots or machines. But we always said human factor is what really distinguishes and it is that factor that finally makes the difference.”

Dachser is of the firm belief that technology and the digitalisation process will enhance work and supports work. Much more will be done with digitalisation. There could be more sensors introduced into the logistics network with better technology on board for cargo tracking and tracing. Human resources can be better utilised for more crucial and real functions. Humans will offer far better relations with customers who are always looking for a real person to talk to and not a robot.

“I believe logistics still depends on fulfillment. I don’t think that logistics, as a channel, will be looking very different from what it is now. There will be some niches where you will see some real differences in the applications of different technologies. For Dachser, digitalisation is more an evolutionary process than a revolutionary one. We already started down that path three decades ago and it is an ongoing part of our corporate strategy,” confirms Simon.

For Dachser, the business is around the physical movement and storage of goods, and Simon says that it will always be that way. “The fact is that only those who deliver securely, reliably, transparently and with high quality will survive in the marketplace. To do so, we need powerful network, intelligent strategies and people who will take on this challenge with superior knowledge, passion, and an ability to work as part of a team.”

Digitalisation is part of Dachser’s philosophy and it is in their mindset. “We don’t have to reinvent it; we just have to plug into it where we want it. That is why I understand digitalisation to be an enabling technology , not a replacing one,” he adds.

Founded in 1930 by Thomas Dachser in Kempten, Germany, Dachser continues to be a 100 percent family-owned company up through the present day. As one of the global leaders in the logistics industry, Dachser has successfully proven for decades that a family-owned company can achieve much with committed employees and innovative thinking.

Dachser, on the one hand, demonstrates the changing world affairs of the past eight decades; while, on the other hand, it portrays the dynamic changes of the logistics industry in the age of globalisation and rapid technological progress. It is growing organically and the growth is as a result of a long-term strategy. For the year 2016, Dachser generated consolidated revenue of around 5.71 billion Euros.
Elaborating on the philosophy that sets Dachser different from the startup ecosystem, Simon says, the startup ecosystem mostly aims for projects and lucrative stand-alone solutions; whereas at Dachser it works with integrated processes. Dachser claims that it has been doing it for decades even though it requires a very different approach to innovation.

“We follow a system that combines cyber, social and physical dimensions. In other words, in Dachser the network, the person, and the physical transport are inextricably linked in logistics,” explains Simon.

Dachser was passed to Simon’s mother and his aunt before he took the helm as CEO in 2005. The company has a constitution to safeguard its continuity as a family business and ensure the separation of family affairs from the business itself. The shareholders and executive board advocate common values and social responsibility in three areas: the economy, ecology and social issue. In this regard, a particularly high priority is given to the training of young people at Dachser. In Germany alone, more than 600 trainees started their careers at the company last year. Currently, the total number of young apprentices at Dachser locations in Germany is 1,417, which equals a training rate of around 10 percent.

In 2016, the company invested 125 million euros in the networks. According to Dachser, an investment volume of 177 million euros has been earmarked for 2017.

“We will use it to continue on our chosen path and ensure we always have cutting-edge network and IT infrastructure in place. We first want to understand the market our customers operate in and what makes them successful. Only then can we partner with them on their road to success in their markets and take on the logistical challenges they face,” Simon elaborates.

While Dachser embraces technology and keeps pace with digitalization it is looking for “more logistics natives who are capable of combining and orchestrating the digital and the physical world”. This, according to Simon, goes beyond digitalization.