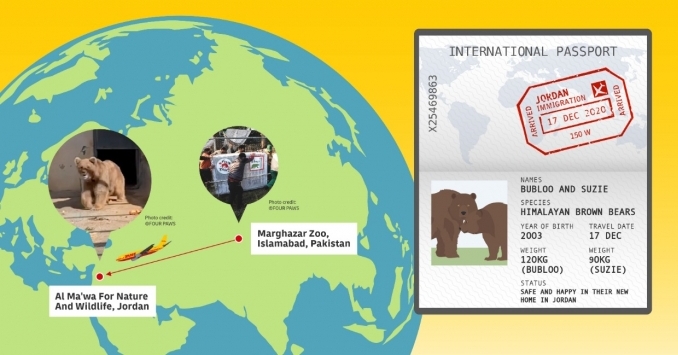 X
The two highly-endangered bears are settling in Al Ma'wa for Nature and Wildlife in Jordan after a temperature-controlled multimodal journey from Islamabad
Our Correspondent14 Jan 2021 7:21 AM GMT

Kelvin Leung, CEO, DHL Global Forwarding Asia Pacific, said, “Being able to leverage our logistics expertise, temperature-controlled capabilities and customs clearance solutions to help animals, such as Bubloo and Suzie, relocate brings another perspective to our mission of “Connecting People, Improving Lives”. The successful move, like so many others that we have done, might have required more elaborate planning but brought the teams so much satisfaction. We are glad that the bears are settling in their new home in time to ring in the New Year.”

Deutsche Post DHL Group managed the logistics of flying the animals, while veterinary specialists from FOUR PAWS, who accompanied them on the same flight, provided insights to make the journey comfortable for the bears. DHL chauffeured Bubloo and Suzie, weighing 120 kilograms and 90 kilograms respectively, to the Islamabad International Airport in custom-built cages that adhere to the International Air Transport Association’s regulations. From there, they boarded their flight to Jordan with a short layover in Doha.

Dr Amir Khalil, FOUR PAWS veterinarian and leader of the rescue mission, said, “We are pleased to report that, after their first-class flight experience that ended at the Queen Alia International Airport, Bubloo and Suzie are thriving in their new home. The months of detailed planning with DHL in coordination with local Pakistan officials and the financial help of American businessman Eric S. Margolis, have paid off as the bears begin to build their new lives at Al Ma'wa for Nature and Wildlife, a sanctuary run by the Princess Alia Foundation and FOUR PAWS.”