Delhi Airport recorded highest ever freighter movement of 1,850 in June

July 16, 2020: Delhi International Airport has handled 1,850 cargo freighter aircraft in the month of June 2020, which is the highest in the country and highest-ever recorded movement in Delhi. This comprises of 1,091 scheduled and 759 non-scheduled freighter movements. 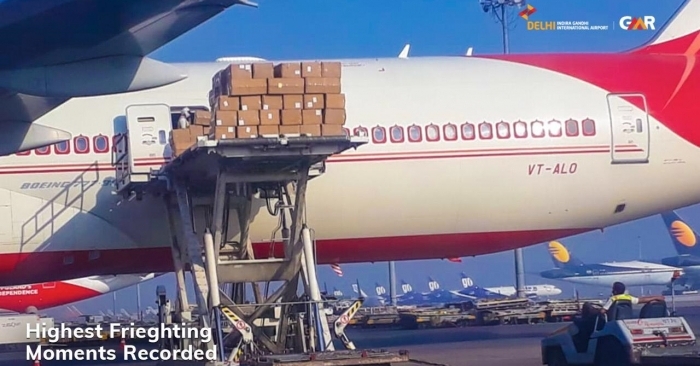 July 16, 2020: Delhi International Airport has handled 1,850 cargo freighter aircraft in the month of June 2020, which is the highest in the country and highest-ever recorded movement in Delhi. This comprises of 1,091 scheduled and 759 non-scheduled freighter movements.

According to the white paper released by the airport, it has also recorded the highest volume of air cargo in India between April & June, the first quarter of the financial year 2021.

These imported medical kits were distributed all across the country including far-flung destinations of Northeast states - Nagaland, Manipur, Meghalaya, Assam, Sikkim – and major cities such as Mumbai, Bengaluru, Cochin, Hyderabad, Vijayawada etc.

Happy to Announce that #DelhiAirport has recorded the Highest ever Cargo Freighter Aircraft movements of 1,850 Nos. in the month of June, comprising of 1,091 scheduled and 759 non-scheduled freighter movements. pic.twitter.com/yrATX7WAbm

“Dedicated teams operated 24X7 at Cargo Terminals of Delhi Airport and set up a 3800 sqm facility within a record time of 7 days to handle Covid-19 related medical essentials. These medical import cargos were stored in separate export zones while following the norms of government of India of social distancing, sanitization and safety,” said the whitepaper.

Soon after the lockdown was imposed, Ministry of Civil Aviation had designated Delhi Airport as one of the hubs for import and distribution of essential medical supplies for fight against Covid-19.

Krishi Udan
In addition to essential medical supplies, Delhi Airport also acted as a hub in supporting Government of India’s flagship initiative ‘KRISHI UDAN’ in the current challenging time by transporting agricultural products to international and domestic markets. The first consignment of fresh vegetables from Varanasi was carried by the British Airways on Delhi-London lane on 23rd April 2020 with the support from Agricultural and Processed Food Products Export Development Authority, GOI and Ministry of Civil Aviation. 3 metric ton of mangoes from orchards around Lucknow was sent to Dubai by Air India Express flight on 4th June 2020.

Videh Kumar Jaipuriar, CEO of DIAL said, “During the nationwide lockdown, Delhi Airport relentlessly worked for timely and smooth supply of medical equipment and relief material to and from Delhi to various destinations in India. In this challenging time, DIAL has played a very crucial role in the fight against COVID19 by round the clock handling of international and domestic cargo movement. The air cargo terminal at the IGI Airport has been operating 24*7 to support the country in handling and processing essential commodities, especially healthcare and medical supplies. We ensured that essential medical kits reached not only in the big cities but in far-flung destinations of the country. In collaboration with the ministry of civil aviation and all its stakeholders, DIAL is committed to serve this great nation.”