The port’s cargo handling is expected to cross 127 MMT by end of the current fiscal as per current projections. 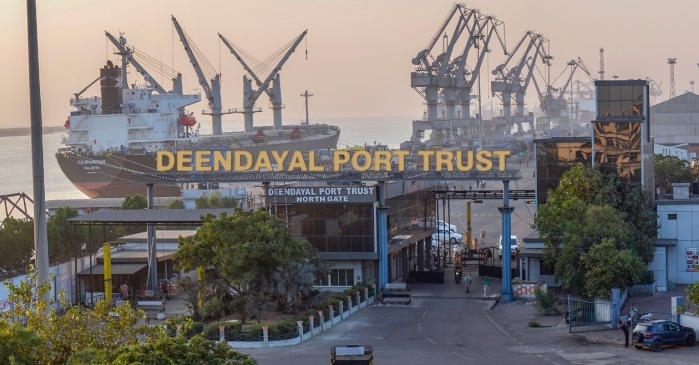 January 13, 2022: Despite the challenges faced in international trade owing to the ongoing global supply chain and shipping crisis affecting the cargo handling capabilities, the Deendayal Port Trust (DPT) has crossed the 100 MMT milestone earlier this week. It has since become the first government sector major port to cross the mark in the fiscal 2021-22.

Incidentally, DPT has crossed the milestone four weeks ahead in comparison to the last fiscal FY 2020-21. An increase was seen in the import cargo such as POL(petroleum oil and lubricants), edible oil, liquid fertilizer, raw materials like phosphoric acid and ammonia, chemicals, rock phosphate, steel pipes, iron ore, coal, timber logs and crude Oil. Export cargo such as edible oil, chemicals, foodgrains like wheat and soya bean mill, Bentonite and POL products at the Vadinar port have also witnessed growth in cargo throughput during FY 2021-22 as compared to FY 2020-21.

Speaking about the milestone achieved by DPT, S K Mehta,(IFS) Chairman of the Deendayal Port Trust who was recently speaking at the first zonal conference on PM Gati Shakti for western region held in Gandhinagar, Gujarat on future roadmap for the port said, “The Port is focusing on six main areas to achieve 200 million metric tonnes per annum (MMTPA) of cargo handling capacity by 2029-30. The focus area includes cargo and productivity improvement; landlord port development; port led industrialization; coastal shipping and Ro-Ro; Ro- Pax expansion; ease of doing business and cost of doing business improvement as well as green and safe Port.”

DPT’s cargo throughput growth in the third quarter of the current fiscal was the highest among all the government run major ports, with the port registering 33.52 MMT traffic in the Oct-Dec21 quarter.

More recently in the month of December 2021, DPT had handled 11.32 MMT cargo which had contributed to about 18% of the total cargo handled by all the major Indian ports. The Port’s cargo handling is expected to cross 127 MMT by end of the current fiscal as per current projections, cited a press release from DPT.