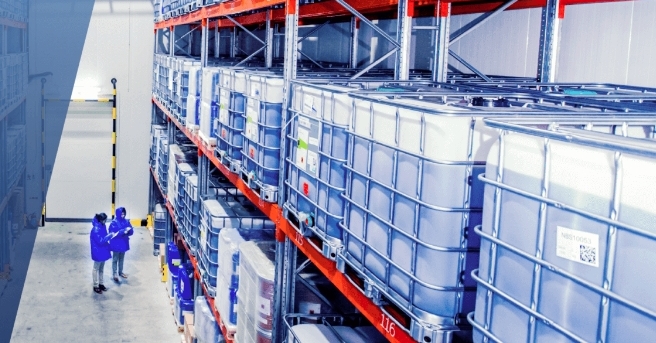 X
The rating reflects Snowman%u2019s established market position in the temperature-controlled logistics segment, which benefits from continued parentage due to operational and strategic linkages with its parent, Gateway Distriparks.
Our Correspondent21 April 2021 7:39 AM GMT

“The rating reflects Snowman’s established market position in the temperature-controlled logistics segment, benefits from continued parentage due to operational and strategic linkages with its parent, Gateway Distriparks (GDL; holding 40.25 percent stake in Snowman). The rating also factors in Snowman’s adequate financial risk profile, with improving operating profitability and prudent funding mix for the proposed capacity expansion plan. These strengths are partially offset by exposure to funding risks related to capex, susceptibility to competition and volatility in end-user segments.”

CRISIL Ratings believes Snowman will benefit from its established market position and continued parentage of GDL. The financial risk profile is expected to remain adequate, supported by the expected improvement in operating performance and prudent funding of capex plans.

As of December 31, 2020, the company had a warehousing capacity of 106,128 pallets in 31 strategic locations across 15 cities. It also had 264 refeers providing last-mile, inter-city distribution services through a consignment agency model. It caters to marquee customers in diversified end-user industries, such as seafood, pharma, dairy and Quick Service Restaurant (QSR). The company is also setting up dedicated warehouse facilities for large e-commerce players, thereby providing steady revenue and profitability.

2. Continued parentage of GDL
Post settlement of agreement between Snowman and Adani Logistics in July 2020, GDL is the single largest owner with 40.25 percent stake in the company and substantial control on the board. The rating continues to benefit from moderate operational and strategic linkages with GDL, as both the companies offer complementary services in the logistics industry, thereby providing cross-selling opportunities to customers.

GDL is one of the largest private players in the container freight station, railways and inland container depot businesses in India. Furthermore, Snowman is well established amongst the leading organised players, providing temperature-controlled services in India.

3. Adequate financial risk profile and improving operating profitability
Gearing stood at 0.15 time as on March 31, 2020, and is expected to moderate in fiscal 2021, after factoring in additional debt for part-funding the ongoing capex. The company has a capacity of 1,06,128 pallets and the addition of 12,000 pallets at cost of about ₹70 crores is underway which is expected to be completed in fiscal 2022.

Any further capacity expansion plan would be funded from internal accruals and equity infusion. With no additional debt-funded capex planned and healthy internal accruals, gearing is expected to remain below 0.25 time over the medium term. Debt protection metrics are adequate with interest coverage and net cash accrual to total debt ratios estimated at around 10 times and 63 percent, respectively, in fiscal 2021. Any higher-than-expected debt for funding capex could adversely impact the capital structure and debt protection metrics and will remain the key monitorable.

4. Snowman’s revenue growth
Snowman’s revenue has grown at a compound annual growth rate (CAGR) of 8 percent over the three fiscals through 2020 to ₹241 crore, driven by healthy capacity utilisation and increasing realisation in its warehousing business. Revenue during the first nine months of this fiscal fell 3 percent year-over-year to ₹173 crore while operating profitability improved to 21.4 percent from 16 percnet in the same period last year, mainly due to improved utilisation of its warehouses to 86 percent from 79 percent last year. However, realisations moderated by 8 percent to ₹1,380 per pallet per month, amidst the Covid-19 pandemic. Snowman’s revenue is expected to be marginally lower in fiscal 2021, as compared to last fiscal, due to the adverse impact of the pandemic and lockdown in the first quarter of the fiscal.

1. Exposure to risks related to capacity expansion
Snowman is adding 12,000 pallets in its warehouse business at a cost of about Rs. 70 crores, which is expected to be completed in fiscal 2022. The company has plans for further capacity expansion across locations in India and almost double its capacity to about 2 lakh pallets over the medium term. The future capex plan is expected to be prudently funded through internal accruals and equity infusion. Snowman will remain exposed to risks related to implementation of capex in a timely manner and healthy occupancy levels subsequently. Any delay in implementation of capex or funding tie-up could adversely impact the company’s financial risk profile and will remain a key monitorable.

2. Highly capital intensive operations
The business is highly capital intensive, with continued investments in the warehousing and transport assets. Snowman had incurred about Rs. 200 crores in the capacity expansions over the past five years; however moderate operating performance has resulted in Return on Capital Employed (ROCE) of about 2-4 percent during this period. With ongoing capex plans and expected sustained improvement in operating profitability, ROCE is expected to improve and will remove the key monitorable.

3. Susceptibility to competition and volatility in end-user segments
The temperature-controlled industry is highly fragmented, with large presence of unorganised players given low barriers to entry. Snowman’s operations are susceptible to competition from local players across markets. However, they lack quality end-to-end service offerings which helps organised players such as Snowman to garner marquee customers across end-user segments, such as pharmaceuticals, seafood, QSR and fast-moving consumer goods. About 25-30 percent of Snowman’s revenue comes from seafood customers, which were impacted by two cyclones (Bulbul and Fani) in fiscal 2020, thereby constraining operating profitability to 19.7 percent as compared to 25.5 percent in fiscal 2019. Volatility in demand from end-user segments could impact Snowman’s operating performance and will remain a key monitorable.

Upward factors
• Sustained revenue growth with capacity expansion and a stable operating margin above 28-30 percent
• Improvement in the capital structure with higher equity infusion or faster debt reduction, backed by a sharp pick-up in operating performance
• Improvement in operational and financial linkages with GDL or better credit profile of GDL