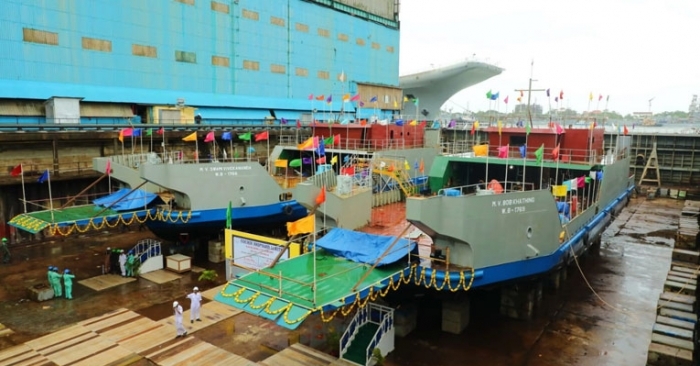 X
The new vessels are the third and fourth in the series of a 10-vessel order from IWAI.
Our Correspondent12 Aug 2019 6:02 AM GMT

August 12, 2019: Cochin Shipyard Limited (CSL) launched two Ro Pax vessels for Inland Waterways Authority of India (IWAI) on August 8. The new vessels are the third and fourth in the series of a 10-vessel order from IWAI.

The launch ceremony was attended by senior officials of IWAI, directors and employees of CSL. The vessels were launched by Dr Asha Paul, wife of Mathew George, director, IWAI and Mini CC, wife of Suresh Babu NV, director (operations), IWAI.

Cochin Shipyard is building a total of eight Ro Pax vessels and two Ro-Ro vessels for IWAI. IWAI nominated CSL for the construction of these vessels, which will be operated in strategic locations in National Waterways 1 and 2. These vessels can accommodate around 200 passengers and will have eight crews and can carry two trucks and four cars. It is equipped with all the life-saving equipment and is built as per the IRS standards.

Currently, CSL is building India’s first Indigenous Aircraft Carrier (IAC) for the Indian Navy which is in advanced stages of testing and commissioning. CSL is also building a Technology Demonstration Vessel for the DRDO, two 1,200 Pax and two 500 Pax vessels for the Andaman & Nicobar administration. CSL is also constructing a total of 27 small vessels for clients like IWAI, department of Fisheries, government of Kerala and government of Tamil Nadu and Indian Navy.
CSL is also investing a total of Rs2,769 crore in building a new 310 M long dry dock at Kochi and a ship lift based ship repair yard at Willingdon Island, Kochi.