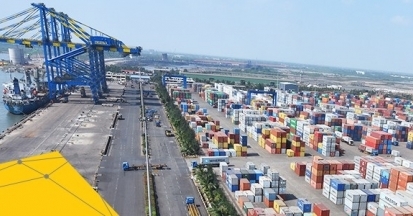 July 23, 2020: The Indian trade regulator Competition Commission of India (CCI) has approved the acquisition of equity shareholding along with management control of Krishnapatnam Port Company (KPCL) by Adani Ports and Special Economic Zone (APSEZ) on Wednesday.

In January 2020, APSEZ acquired a controlling stake of 75 percent from the existing shareholders of KPCL for Rs 13,500 crore.

“The acquirer manages the logistics chain (i.e. from vessels management to anchorage, pilotage, tug pulling, berthing, goods handling, internal transport, storage and handling, processing and final evacuation by road or rail). KPCL is engaged as a developer and operator of the deepwater port at Krishnapatnam, Andhra Pradesh, pursuant to the concession agreement on Build-Operate-Share-Transfer basis with the government of Andhra Pradesh for a period of thirty years from the date of commercial operations and entitled for a further period of 20 years (two periods of 10 years each),” said the CCI release.

.@CCI_India's seal of approval for #AdaniPorts' acquisition of #KrishnapatnamPort will further our vision 2025 of handling over 400 MMT cargo and accelerating port-led prosperity for the nation. #PortsOfProsperity https://t.co/iocmmX6fK9

Adani Ports and Special Economic Zone
As the logistics arm of Adani group APSEZ aims for a total throughput of 400 MMT by 2025 and already has 11 ports and terminals at Mundra, Dahej, Kandla and Hazira in Gujarat, Dhamra in Odisha, Mormugao in Goa, Visakhapatnam in Andhra Pradesh, and Kattupalli and Ennore in Chennai. The company is also building a transhipment port at Vizhinjam, Kerala and a container terminal at Myanmar.