October 29, 2020: According to the latest Xeneta Shipping Index (XSI®) Public Indices report, in October leading carriers succeeded in not just protecting their all important long-term contracted rates but boosting them. October sees rates jump by 1.3 percent compared to September, leaving them up 1.2 percent year-on-year. 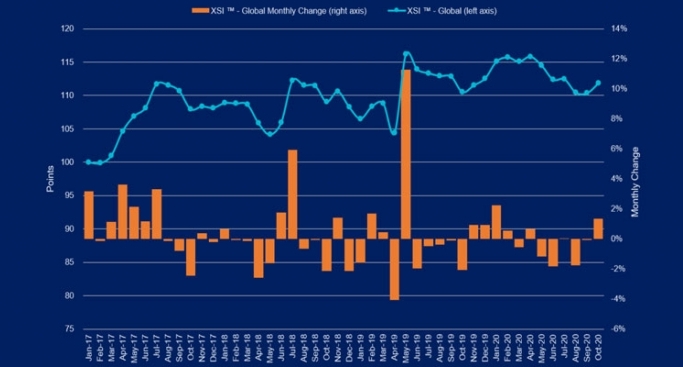 X
The traditional forwarder-carrier relationship is now being tested by Maersk%u2019s decision to offer an improved, integrated service. This essentially sees them competing for the same customer base.
Our Correspondent29 Oct 2020 7:09 AM GMT

October 29, 2020: According to the latest Xeneta Shipping Index (XSI®) Public Indices report, in October leading carriers succeeded in not just protecting their all important long-term contracted rates but boosting them. October sees rates jump by 1.3 percent compared to September, leaving them up 1.2 percent year-on-year.

It’s enough to have industry observers scratching their heads in wonder. In the face of continued economic uncertainty, a delicate geopolitical situation, and a crippling global pandemic – all with obvious widespread international trade implications – container shipping companies are seemingly managing an impossible balancing act.

The Xeneta Shipping Index (XSI) has revealed slight dips in rates over the course of the pandemic, but nothing in keeping with the wider market turmoil. As it stands, long-term contracted rates are down just 0.6 percent since the end of 2019, while spot rates on key routes (such as Far East-North Europe) remain at all-time highs.

“You have to take your hat off to the strategists at the leading carriers,” comments Xeneta CEO Patrik Berglund. “They’ve managed capacity with real expertise, withdrawing tonnage when necessary, maintaining contracted rates and pushing shippers onto the spot market where they can gain a better yield. Tenders have become increasingly difficult for shippers in what really is a ‘seller’s market’ and, as we enter a key trading period, you have to question whether there’s any relief in sight. As RFQ season settles in shippers, need to expect further rate increases in the contract market over the next months. The end of YoY savings is not at all far-fetched.

Confidence of shipping lines
Obviously, as we have seen time after time in this dynamic segment, things can change almost overnight - but for now carriers are performing beyond expectations. In fact, Maersk has changed its EBITDA forecast for the year from $6-7 billion to $7.5-8 billion, while Japan’s top three carriers have also raised guidance for the year. We’ve now seen CMA CGM taking the decision to announce a peak season surcharge of $150 from November 1 on the Far East -North Europe route, showing their confidence.

Berglund says the already complex array of factors at play in the industry may be set to grow even more opaque.

Maersk vs forwarders
“Away from the broader economic and pandemic picture we can also see change within the industry itself,” he notes. “The traditional forwarder-carrier relationship is now being tested by Maersk’s decision to offer an improved, integrated service. This essentially sees them competing for the same customer base as forwarders. As a result, DB Schenker has already decided to move volume away from the Danish line due to conflict of interest.

“Maersk is not alone in looking to gain closer ties to shippers, with other carriers also developing integrated digital platforms. On the subject of digital, e-commerce sales are also increasing and this offers a new opportunity for forward-thinking carriers. For example, Zim and Alibaba.com have just announced strategic cooperation that will see the Chinese e-commerce giant purchase sea freight with the Israeli line. This kind of partnership offers improved logistics chains for e-tailers and increased share for carriers.

“How will these evolving relationships – between carrier, shipper and forwarder – impact upon rates? It’ll be intriguing to see how this plays out.”