As many as 73 cancelled sailings have been announced out of 553 scheduled sailings across the major trade lanes -  Transpacific, Transatlantic and Asia-North Europe -  representing 13 percent cancellation rate. 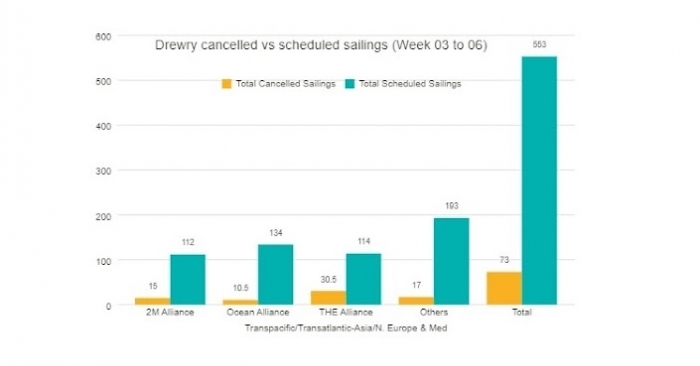 January 17, 2022: As many as 73 cancelled sailings have been announced out of 553 scheduled sailings across the major trade lanes - Transpacific, Transatlantic and Asia-North Europe - representing 13 percent cancellation rate.

During this period, 64 percent of the blank sailings will be occurring in the Transpacific Eastbound trade, and mostly to the West Coast, according to the Cancelled Sailings Tracker from Drewry for the week ended January 14, 2022.

Supply chain disruption and market volatility remain high as the Omicron variant has rapidly spread to Tianjin and Shenzhen in China. "Shippers seeking to avoid congestion at Ningbo port by switching to alternative ports, such as Shanghai, have only increased bottlenecks and pressure elsewhere. It remains extremely difficult to avoid delays and high transportation costs while demurrage and detention fees have soared."

Freight rates reach new highs
All-inclusive container shipping rates from North and Southeast Asia to North America were being viewed as having reached a medium-term ceiling after returning to record high levels but support is expected to be maintained at least for another month on demand for restocking ahead of the Lunar New Year holiday, S&P Platts Global said in its weekend update.

While freight capacity will remain tight, supply chain extremes seen in 2021 will level off in 2022 with the markets expected to return to a more normalised demand after Chinese Lunar New Year, says project44 in its latest estimates.