Cargolux heads from Luxembourg to Jakarta in weekly service

June 27, 2019: Cargolux has expanded its Asia-Pacific network with the launch of flights from Luxembourg to the Indonesian capital city Jakarta. 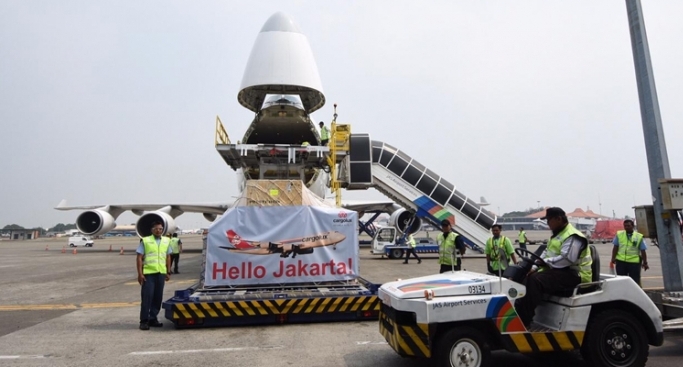 X
With the launch of this route, Cargolux becomes the only all-cargo carrier to offer a direct main deck connection between Europe and Indonesia.
Our Correspondent27 Jun 2019 5:21 AM GMT

June 27, 2019: Cargolux has expanded its Asia-Pacific network with the launch of flights from Luxembourg to the Indonesian capital city Jakarta.

The new frequency connects Luxembourg to Jakarta once a week. The flight leaves the Grand-Duchy on Sunday and arrives in Jakarta on Monday. The rotation then continues through Hong Kong and Ashgabat before returning to Luxembourg on Tuesday morning.

With the launch of this route, it becomes the only all-cargo carrier to offer a direct main deck connection between Europe and Indonesia.

The route will allow the airline to cater for a wide variety of commodities, as well as off-size freight such as oil and gas industry equipment, machinery, spare parts or aircraft engines.

The main cargo transiting through the area will include apparel, footwear, pharmaceuticals perishables and live animals.

Domenico Ceci, Cargolux’s executive vice-president sales and marketing, said: “This new frequency contributes to enhancing our service offering in the South-East Asian region and better connecting us with our customers in the area. Jakarta is an influential commercial centre, and we look forward to building local partnerships and furthering the city’s establishment as a global business gateway.”

The thriving Indonesian megalopolis is the world’s second largest urban agglomeration and home to the ASEAN secretariat, making it an attractive commercial destination.

Customers in Jakarta will have the opportunity to benefit from the airline’s extensive road feeder services from Luxembourg hub to a vast choice of European destinations.

Cargolux has actually been doing business in Jakarta for over 23 years, mostly through partnerships and interline agreements so far.

The airline did operate 4 charter flights, 2 inbound and 2 outbound, to CGK in 2018 ahead of the Asian Games.

The inaugural flight took off on June 23 and the aircraft was welcomed by a traditional water salute following touchdown.