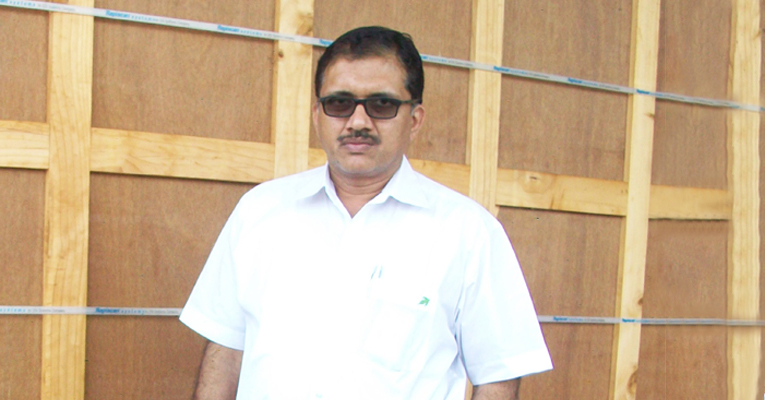 The first green-field airport in India built under the public-private partnership, Cochin International Airport Ltd. (CIAL) registered a 17.8 percent growth in passenger traffic and 15.6 percent in cargo volumes in 2016. As the volume handled by the airport was on the rise, recently, a new international terminal was put into operations. Over the last two decades, Cochin Airport has become the hub of Middle East traffic (both passenger and cargo).

A civil engineer by profession, Paul J Kocheril, he was one of the first recruits at CIAL in 1994. Kocheril was instrumental in the construction of CIAL. For the past 16 years he has been associated with the air cargo complex. As the Deputy General Manager - Cargo, Cochin International Airport, Kocheril speaks to Rashmi Pradhan on the growth of traffic and performance of CIAL.

What are the key features of Cochin International Airport? This is the first airport in the country built under public-private partnership model and perhaps the first airport in the world fully operated on solar power. Since its nception in 1999, CIAL has been trying to integrate local and international technologies to enhance effective operations. We don’t compromise on standards and always adhere to the inclusive business model which encompass habitat around when implementing infrastructure expansion.

CIAL cargo facility has nearly 2,00,000 square feet area (office and warehouse). Of which nearly 132,000 is dedicated for warehouse. To offer superior cargo services to airlines, forwarding agents, shippers and consignees, we stick to the concept of fine tuning our procedures to meet the ever-changing demands and challenges of the constantly evolving air cargo industry.

CIAL can easily accommodate long-haul direct and non-stop international/domestic crafts. The biggest advantage CIAL has is that it is well connected by road and rail and rail network. The NH 47 is connected to CIAL by a four-kilometre four-lane road. The railway line cuts across the CIAL land.

What is in the pipeline on the cargo front? There is a full-fledged expansion plan in place for cargo infrastructure expansion. As part of our vision, we are in the process of setting up a separate fully automated new import and export section. This facility will have all the modern material handling equipment and facilities. The new import warehouse will have a separate area for courier, baggage and commercial cargo. In addition to this, the administrative offices for customs and other related agencies also will be integrated into the new premises.

Give details of the upcoming cargo village concept? 50 Acres has been earmarked for the cargo village. Once completed the cargo village will offer separate sections for marine products, couriers, express cargo, valuables and vulnerable cargo. The logistic centre, along with the multi-modular operation of the sea to air and air to sea transhipment will be another attraction focusing on the movements in Vallarpadam International Container Terminal at Cochin Port.

Also, there are separate areas dedicated to the storage and handling of domestic (inbound, outbound cargo including courier) and international cargo including the transhipment cargo.

The entire International air cargo centre is designated as a Customs Bonded area.It is equipped with the state of the art automation tools and computers that control the cargo terminals.

We are also planning a separate import warehouse, which will be having separate facilities for handling courier, passenger baggage and commercial cargo. It will also include administrative offices for government agencies like customs, PQ, PHO and other agencies associated with cargo clearance.

How do you ensure the smooth functioning of cargo movement at the airport? CIAL is the sole cargo handling agency for all carrier operating from Cochin International Airport. Right from the acceptance of cargo to the warehouse to customs examination, security clearance, stuffing, documentation including manifestation are all handled by CIAL. Since we are following a single shop concept in cargo handling, there is practically very less interference and coordination issues.

What according to you makes Cochin Airport the first choice of cargo carriers? The addition of airline services to Cochin Airport every year has led to increase in passenger and cargo capacity. Since it started its operations, CIAL has grown as the hub of Middle East cargo traffic in South India. The accessibility, the flying time etc are the factors that determine the cargo growth (especially fruits and vegetables to the Middle East) of CIAL. As over 80 percent of export cargo at CIAL are perishables. The facilities like the centre for perishable cargo, a temperature controlled warehouse exclusively for handling perishable has fuelled the growth. The airport adheres to low-cost model with no compromise on the quality of infrastructure and service.