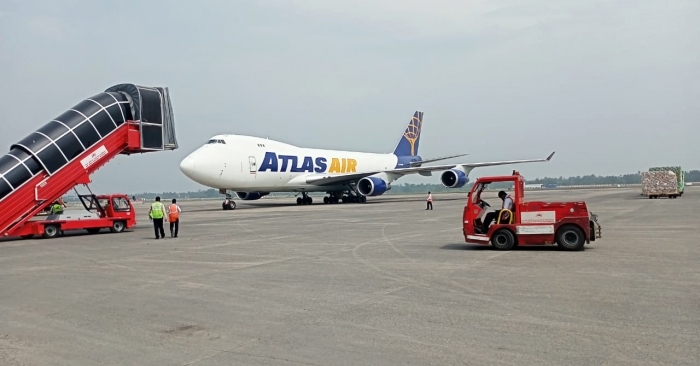 Apparels from Dhaka
Bangladesh is the second-largest apparel producer in the world after China. The country houses factories that produce readymade garments for the world’s best brands that include H&M, Zara (Inditex), Gap, Target, Benetton, Puma, Primark, Tesco, M&S and many others. However, air freight capacity for these fast fashion brands out of Bangladesh, particularly from Dhaka, is either restricted or too expensive. And the Covid-19 pandemic this year made things worse not just for millions of people employed in these factories in and around Dhaka but getting what has already been produced to markets became even more daunting with the restrictions on international flights.

History of transhipment from Bangladesh
A pilot project that was initiated by the government of India in November 2018 to facilitate better cargo evacuation and logistics efficiency in the region is of great help to international shippers.

A circular, dated November 2, 2018, by the Central Board of Indirect Taxes & Customs under the department of revenue in the ministry of finance, laid out the procedure for a pilot transhipment of export cargo from Bangladesh to third countries through land customs station in Petrapole to seaports in Kolkata and Nhava Sheva in Mumbai and to Kolkata airport in containers or closed bodied trucks. The pilot programme was made available from November 5, 2018.

It was introduced on a pilot basis to gain experience and obtain feedback from the industry so as to frame a facilitative regulation with adequate safeguards. The circular has been extended from time to time and the board in a letter, dated 5 February 2020 and signed by Swati Bhanwala, officer on special duty for Land Customs, granted the extension of the pilot programme till June 30, 2020. On June 22, 2020, the board issued a fresh circular signed by Bhanwala stating: “After reviewing utilisation and other relevant aspects and with a view to facilitating trade the board has decided to continue the facility until further direction following the procedure prescribed in the original circular dated November 2, 2018.”

Kolkata, the transhipment hub
As the pilot project nears the completion of two years, global shippers have moved hundreds of tonnes of cargo from Bangladesh through Airport Authority of India (AAI) operated and managed CCU. Cargo has been lifted from CCU in the bellies of international passenger flights flying predominantly through Middle East airports. One of the international apparel brands that have contract production in Dhaka has a monthly demand for 900 tonnes of air freight capacity in the peak season from Dhaka. This brand has been using the pilot project and lifting from 50 to 100 tonnes of cargo per week from CCU to its European headquarters.

AAI Cargo Logistics and Allied Services (AAICLAS), the 100 percent subsidiary of AAI which manages international and domestic cargo at all AAI airports in India, which handled the cargo at CCU said the challenge was completed in less than 48 hours, which includes the movement of cargo from Dhaka.

Inditex, AAICLAS, MoCA
It is interesting to note how swiftly the government of India responded to the industry demand in 2018. One of the prominent voices of the apparel industry, which was looking at the most suitable and efficient alternate route for cargo evacuation from Dhaka, was Diego Hermida. He was the regional manager import, export and transport for South Asia & Oceania at Inditex based in New Delhi. He had ample support from Keku Gazder, the chief executive officer of AAICLAS. A project of this nature involves multiple ministries at the centre and it was Vandana Aggarwal, senior economic adviser in the Ministry of Civil Aviation, who hatched the plan and ensured that it is implemented as quickly as possible. It is reliably learnt that this pilot project had been prepared, finalised and rolled out in less than 10 days from the time she received in her office.

While Hermida has moved back to Spain, his successor Jon Koldo is ensuring that he has enough air freight capacity out of CCU and thinking of more such full freighters.