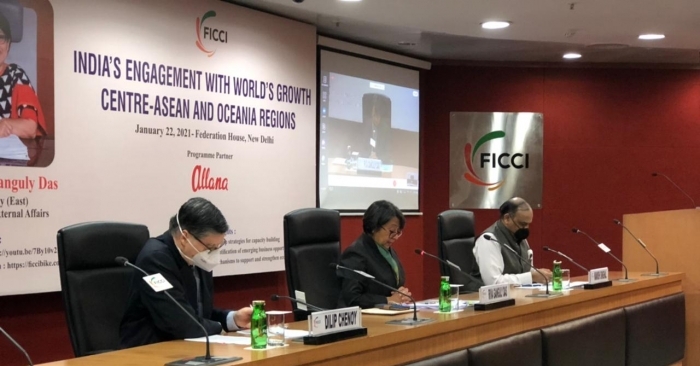 X
She highlighted the need to explore opportunities in emerging areas of cooperation like building connectivity through India- Myanmar - Thailand trilateral highway.
Our Correspondent28 Jan 2021 5:01 AM GMT

Addressing the session India's Engagement with World's Growth Centre - ASEAN and Oceania Region, organized by FICCI, Das highlighted the centrality of these two regions in terms of India's vision for Indo-pacific and urged the industry to explore opportunities in emerging areas of cooperation like the blue economy, disaster management and sustainable development, defence cooperation, building connectivity through India- Myanmar - Thailand trilateral highway.

“Key principles of act east policy are the promotion of economic cooperation, cultural ties, and development of the strategic relationship with countries in Indo Pacific region,” added, Das.

“India's economic relations with ASEAN and Oceania countries have evolved over the years. Although we share a dynamic relationship, there is still huge untapped potential in trade and investment aspects that can be achieved. India can play a key role in reforming and creating new partnerships with these regions for enabling economic growth. The session also talked about how India can become the next potential alternative to the world, for de-risking business, bringing an opportunity to be part of global value chains,” noted the release.

He further added that sectors such as start-ups and innovation, e-commerce, infrastructure, artificial intelligence, blockchain, etc. hold the maximum promise for collaboration between India and the countries in the ASEAN and Oceania region.