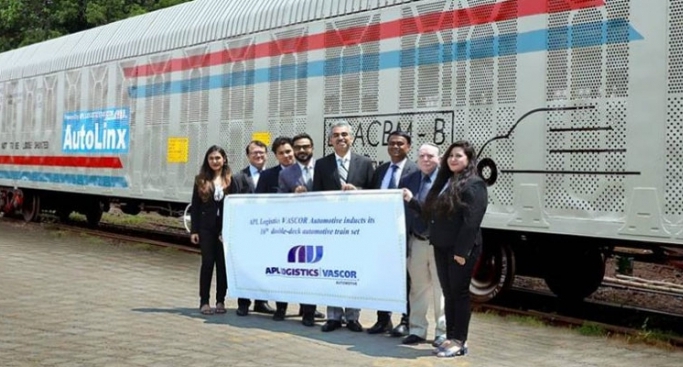 X
The specialised rail wagons can transport (up to) 318 passenger vehicles, but can also accommodate motorcycles and automotive parts.
Our Correspondent4 July 2019 5:22 AM GMT

July 4, 2019: The 16th rake of specialised rail wagons has been delivered to APL Logistics VASCOR Automotive (APLL VASCOR). The rake is the first of five additional rakes scheduled to be introduced this year to APLL VASCOR’s AutoLinx product.

The specialised rail wagons can transport (up to) 318 passenger vehicles, but can also accommodate motorcycles and automotive parts.

The AutoLinx product offers a comprehensive door-to-door solution with its network of 16 train sets and nearly 60 services a month across most of India. AutoLinx further includes a fleet of captive car carrier trailers to support factory pickups and last mile deliveries, as well as IT applications.

India is one of the fastest growing auto markets in the world. According to PWC Autofacts, vehicle production is forecast to grow 36 percent over the next five years, from 4.7 million units in 2018 to 6.4 million units by 2023. “Continued growth of India’s auto sector depends in part on reliable, cost-efficient, environmentally-friendly distribution of finished vehicles that only rail transport can bring," said Bhanot.

“GST has reduced the physical check points of cargo at state borders and enabled location of stockyards dictated by logistics considerations rather than interstate taxes. This in turn will enable faster supply chain lead times, larger transport lot sizes, and increased lane density. Both automakers and consumers alike will benefit”, added Villalon.