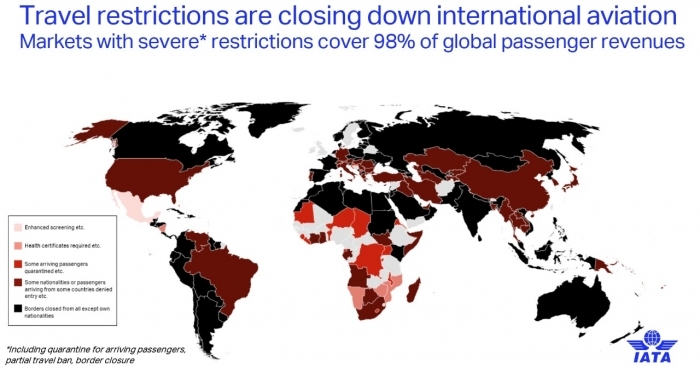 X
Revenue passenger kilometers (RPKs) of airlines in Asia Pacific would alone decline 37 percent and stand to lose $88 billion compared to 2019.
Our Correspondent25 March 2020 5:19 AM GMT

Owing to the severity of travel restrictions and the expected global recession due to the COVID-19 pandemic, revenue passenger kilometres (RPKs) of airlines in Asia Pacific would alone decline 37 percent and stand to lose $88 billion compared to 2019, says the analysis.

"The airline industry faces its gravest crisis. Within a matter of a few weeks, our previous worst-case scenario is looking better than our latest estimates. But without immediate government relief measures, there will not be an industry left standing. Airlines need $200 billion in liquidity support simply to make it through. Some governments have already stepped forward, but many more need to follow suit,” said Alexandre de Juniac, director general and CEO, IATA.

#COVID19: we estimate that aviation industry passenger revenues could drop $252 billion or 44% below 2019’s figure.

Previous analysis of $113 billion loss
IATA’s previous analysis of up to a $113 billion revenue loss was made on March 5, 2020, before the countries around the world introduced sweeping travel restrictions that largely eliminated the international air travel market. This is in a scenario in which severe travel restrictions last for up to three months, followed by a gradual economic recovery later this year.

Conditions of the latest analysis
The latest analysis envisions that under this scenario, severe restrictions on travel are lifted after 3 months. The recovery in travel demand later this year is weakened by the impact of the global recession on jobs and confidence. Full-year passenger demand (revenue passenger kilometres or RPKs) declines by 38 percent compared to 2019. Industry capacity (available seat kilometre or ASKs) in domestic and international markets declines 65 percent during the second quarter ended 30 June compared to a year-ago period, but in this scenario recovers to a 10% decline in the fourth quarter.

Countries announced financial reliefs for airlines
"IATA has been asking governments to provide a lifeline of financial support. A liquidity crisis is coming at full speed. Revenues have fallen off a cliff. Fortunately, many governments understand the critical role of aviation, " said Juniac.

Among countries committing to financial relief are Singapore, China, Hong Kong, Australia, Brazil, New Zealand, Qatar, Colombia, Sweden and Denmark, Norway, and Finland. Several other governments are in the consideration stage—including a $58 billion package in the US and significant support measures from the European Central Bank.

Airlines are an economic & employment engine.

We thank govts around the globe who have committed to relief measures & have recognized the critical role that #aviation plays in the modern world. But more need to step up.