July 28, 2020: The International Air Transport Association (IATA) today released data for June 2020 global air freight market showing that it considerably lost its market share in world trade to ocean and rail as buyers are turning to cheaper but slower means of transport. 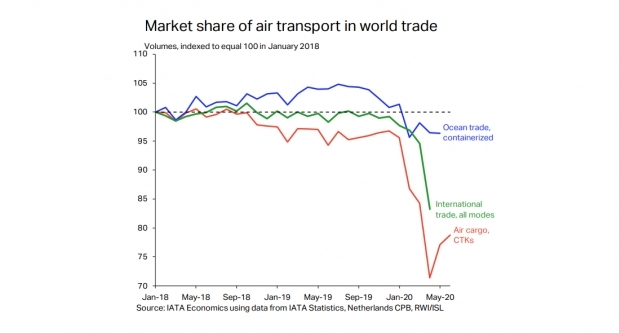 X
However, this pattern is expected to revert as global demand for goods recovers, with firms turning to air transport to rapidly refill their inventories.
Our Correspondent28 July 2020 12:50 PM GMT

July 28, 2020: The International Air Transport Association (IATA) today released data for June 2020 global air freight market showing that it considerably lost its market share in world trade volumes to ocean and rail as buyers are turning to cheaper but slower means of transport.

However, this pattern is expected to revert, according to IATA, as global demand for goods recovers, with firms turning to air transport to rapidly refill their inventories.

June figures
In June, industry-wide cargo tonne-kilometres (CTKs) contracted by 17.6 percent in year-on-year terms, a modest improvement from the 20.1 percent fall in May. Six months into 2020, year-to-date volumes have decreased by 14.5 percent compared to the Jan-Jun 2019 period.

“This relative softness is consistent with air transport losing world trade market share to ocean and rail transport, a typical pattern during downturns. Despite an initial rush towards air freight for urgent PPE and medical shipments, buyers have generally turned to cheaper but slower means of transport,” said the IATA Air Cargo Market Analysis.

Alexandre de Juniac, Director General, IATA, said, “Cargo is, by far, healthier than the passenger markets but doing business remains exceptionally challenging. While economic activity is re-starting after major lockdown disruptions there has not been a major boost in demand. The rush to get personal protective equipment (PPE) to market has subsided as supply chains regularized, enabling shippers to use cheaper sea and rail options. And the capacity crunch continues because passenger operations are recovering very slowly.”

#Aircargo demand is recovering slowly from the effect of #COVID19

Global demand fell by 17.6% in June, a modest improvement from the 20.1% year-on-year drop recorded in May.
https://t.co/klHl6EQF79 pic.twitter.com/TQrmxQq8mw

Capacity
Industry-wide available cargo tonne-kilometres (ACTKs) fell by 34.1 percent year-on-year (YoY), broadly unchanged from May’s fall of 34.8 percent. Despite manufacturing starting to pick up in the region, demand was impacted by the reduction in shipments of PPE by air. International capacity decreased by 32.3 percent.

Belly capacity for international air cargo shrank by 70 percent in June compared to the previous year due to the withdrawal of passenger services amid Covid-19. This was partially offset by a 32 percent increase in capacity through expanded use of freighter aircraft.

Asia Pacific
Airlines based in the Asia Pacific saw international CTKs fall by an even 20 percent YoY in June, slightly below the 18.8 percent decline experienced in May. The region is impacted by the reduction in PPE shipments by air, but many key regional trade routes (Asia – Nth Am, Africa - Asia, Europe – Asia) remain relatively resilient.

The situation was even more challenging in Latin America, as airlines based in the region were faced with a 29.4 percent YoY decline in international CTKs, the worst outcome among the regions. International ACTKs fell 43.6 percent YoY in June – indicating a marked capacity crunch in the region – and most local economies have been deeply impacted by the crisis.